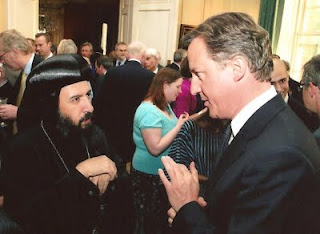 On Wednesday 27 April 2011, Prime Minister David Cameron hosted a reception at Downing Street for a select group of leaders of Christian Churches, denominations and organisations, among whom was His Grace Bishop Angaelos of the Coptic Orthodox Church. The celebration was in light of the Feast of the Resurrection, and there was no mistaking the sentiment shared amongst the guests, and held by the Prime Minister himself, that Britain is, and has always been, regarded to be first and foremost a Christian country.
The Prime Minister spoke personally with His Grace Bishop Angaelos about the current state of affairs in Egypt, expressing his concern about the state of the Church and Christians there.
With regards to the state of Britain today, Mr. Cameron spoke about the need for families, people of all faiths, communities, and individuals to help one another to build a “more prosperous, more generous society…”, one that churches in particular can and are already contributing to a great deal.
With uncanny boldness the Prime Minister also expressed the need for Britain to acknowledge its Christian identity, acknowledging that at the heart of politics lies a wealth of moral questions to which we should not be afraid to respond with our Christian values.
Prime Minister Cameron was also quoted by the Church Times saying “I’ve never really understood this argument about ‘Should the Church get involved in politics? Yes or no?’ To me, Christianity, Faith, religion, the Church, is involved in politics because so many political questions are moral questions…So I don’t think we should be frightened about having these debates and these discussions, and frankly, sometimes these arguments about politics in our country and what it means to be a Christian and what faith brings to our politics.”
It was evident from the words spoken at the reception that as a leader, the Prime Minister sees Christianity playing a vital role in maintaining integrity in the political sphere, and that the opinion that faith is in some way irrelevant or detrimental to Britain’s identity, or that it is something for our country to be afraid of and hide, is one that needs to be re-assessed.
As further quoted by the Church Times, the Prime Minister said “Easter reminds us all to follow our conscience and ask not what we are entitled to, but what we can do for others. It teaches us about charity, compassion, responsibility, and forgiveness.”
Posted by The Coptic Orthodox Church Centre at 11:01