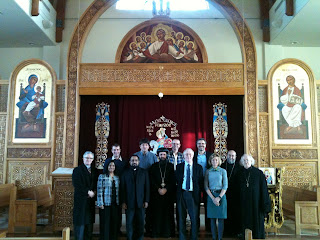 After having been invited to and attending The Third Lausanne Congress on World Evangelization in October 2010, His Grace Bishop Angaelos has been involved in conversations with members of the Lausanne movement. As a result of this meeting, The Coptic Orthodox Church Centre in the UK hosted an Orthodox Evangelical Consultation on Thursday 12th January 2012. Representatives of Orthodox and Evangelical traditions from The United States of America, Bulgaria, India, Albania, Russia and the UK as well as representatives of the Lausanne movement were in attendance.

The Lausanne movement is an Evangelical initiative with a focus on mission, and the aim of the consultation was to establish Orthodox participation in the movement. His Grace expressed the following:

“This step is unprecedented; this is a time to focus on Christian unity and to collaborate and witness collectively where we can, realising that what we have in common in many respects is far more than that which divides us. There will be no compromise on Theology or Dogma, but respecting that, there are still many ways in which we may be able to work together. ”

The meeting was held in a friendly, collaborative environment and participants were hopeful of further positive steps in the near future.
Posted by The Coptic Orthodox Church Centre at 13:55