Memorial Service for H.H. Pope Shenouda III at The Coptic Orthodox Church Centre in the UK 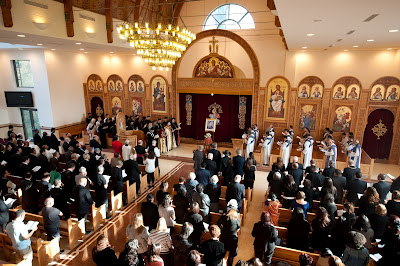 His Holiness Pope Shenouda III, 117th Pope of Alexandria and Patriarch of All Africa on the holy Apostolic See of Saint Mark the Evangelist, departed on March 17th 2012. A memorial service for the United Kingdom, celebrating his life and ministry was held on Saturday 24th March in the Cathedral of Saint George at The Coptic Orthodox Church Centre.

His Grace Bishop Angaelos, General Bishop of The Coptic Orthodox Church in the United Kingdom, and former secretary to the Pope, officiated the service which was attended by representatives of Her Majesty the Queen and His Grace the Archbishop of Canterbury, as well as numerous Ecumenical, Inter-Religious and Civil representatives. Bishop Angaelos was joined by HE Metropolitan Seraphim, also of the Coptic Orthodox Church.

Prior to the service, the Church in the United Kingdom was inundated with messages of condolence and saw an incredible response worldwide. As many were unable to attend the funeral service in Cairo on Tuesday 20th March 2012, this memorial service was seen to provide an opportunity for people to gather together and pray for the repose of the soul of His Holiness, and for the Church at large.

Bishop Angaelos said the following leading up to the memorial service:

“We have been inundated with messages of condolence from many friends across the United Kingdom. It is only fitting to hold this memorial service in order to allow people to join in giving thanks for the life and ministry of His Holiness. It is undoubtedly very sad to farewell a father, yet as a Church, we are confident in the knowledge that our Lord, through the power of His Resurrection that we will celebrate in only a few weeks’ time, promises us life after death, and we join together to pray for His Holiness as he is welcomed into that heavenly promise.”

In his address, he commented on the Pope’s love for people, his heart for Egypt, national unity, for youth, ecumenical unity, and his faithfulness to his spiritual life which supported his service, and stated the following:

“Today is an especially important day for us; the last visit of His Holiness, and indeed his last pastoral ministry engagement in the United Kingdom, was to consecrate this Cathedral. Today we gather to give thanks not only for that, but for his ministry in the United Kingdom and throughout the world over the past 41 years.”

A message from the Archbishop of Canterbury, His Grace the Rt Hon and Rt Rev Dr. Rowan Williams was read during the service by the Rt Rev Bishop Christopher Chessun of Southwark. In it, the Archbishop said:

“We were all very deeply saddened to hear of the death of His Holiness and pray that his memory will be eternal, giving thanks for his life of heroic service and passionate concern for the well-being of the faithful, especially for the young people of the Church, a ministry so clearly prioritised in the work of the Coptic Orthodox Church in the United Kingdom.”

The memorial service was attended by hundreds of people, after which many took the opportunity to sign a book of condolence, expressing their thoughts and memories of H.H. Pope Shenouda III.
Posted by The Coptic Orthodox Church Centre at 20:05