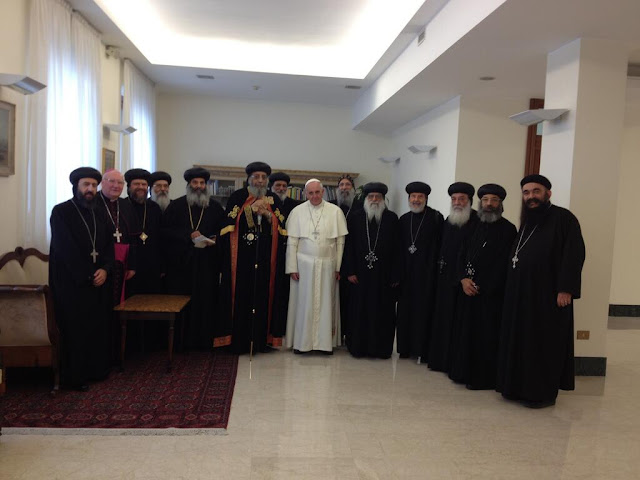 His Holiness Pope Tawadros II, 118th Pope of Alexandria and Patriarch of All Africa on the holy Apostolic See of Saint Mark visited His Holiness Pope Francis, Bishop of Rome and Supreme Pontiff of the Roman Catholic Church on the 9th and 10th of May 2013.

‘We appreciate all we have in common and need to work together to improve the relationships between our ancient Churches and prepare our people for our greater unity.’

‘I am convinced that – under the guidance of the Holy Spirit – our persevering prayer, our dialogue and the will to build communion day by day in mutual love will allow us to take important further steps towards full unity.’

Speaking from Rome as part of the official delegation accompanying His Holiness Pope Tawadros, HG Bishop Angaelos, also Co-chair of the Catholic-Oriental Orthodox Regional Forum in the United Kingdom said:

‘This has been a historic meeting, as it is the first international visit by Pope Tawadros II, who is also the first head of Church to be received by Pope Francis after his installation. During this visit we have seen, in the two fathers of these ancient Apostolic Churches, a real commitment to working together for realised unity.

While centuries have kept us apart for a variety of reasons, it is clear that continued ecumenical dialogue and relations over the past decades have continued to bring us closer.’

The formal meeting was followed by a private prayer service in Pope Francis’ private chapel, led by Pope Tawadros and Pope Francis. 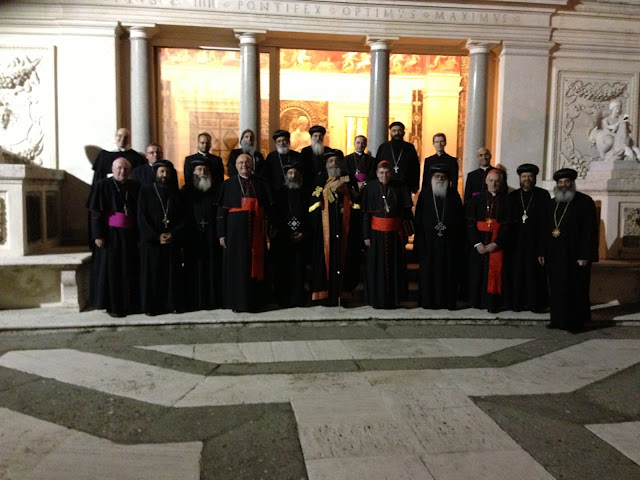 Posted by The Coptic Orthodox Church Centre at 16:56