Press Release: His Grace Bishop Angaelos, General Bishop of the Coptic Orthodox Church in the United Kingdom testified at a Congressional Hearing on ‘Human Rights Abuses in Egypt’ in Washington DC on Human Rights Day, 10 December 2013.

PRESS RELEASE
For immediate use
10 December 2013

His Grace Bishop Angaelos, General Bishop of the Coptic Orthodox Church in the United Kingdom testified at a Congressional Hearing on ‘Human Rights Abuses in Egypt’ in Washington DC on Human Rights Day, 10 December 2013. 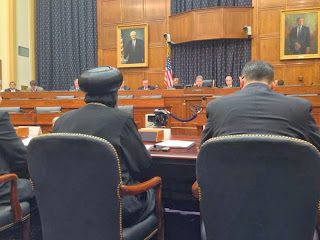 Addressing the congressional panel with four other witnesses, during a Joint Subcommittee Hearing comprised of the Subcommittee on Africa, Global Health, Global Human Rights, and International Organisations, and the Subcommittee on the Middle East and North Africa, Bishop Angaelos underlined the nature and unprecedented level of violence and attacks against minority groups in Egypt pre and post 2011 uprising.

Highlighting a number of incidents occurring in recent months and years, he spoke of the increased incitement that led to the burning, demolition, and attacks on scores of churches, the kidnapping of Christian girls, restrictions on the choice or expression of faith, and the increasing violent attacks resulting in loss of life, and the displacement and destruction of property over decades.

Speaking on behalf of all minorities Bishop Angaelos said:

“I do not only speak as a Christian, because that would be very un-Christian of me. We speak as Christians for everyone, and our view of human rights is for a human rights perspective that covers every person.”

Saying the following regarding the political situation in Egypt:

“What we need to address at the moment are issues of illiteracy and poverty that make constituents vulnerable when they vote and are manipulated, either financially, or in terms of ideology, and of course religion becomes a part of that. What we also need is foreign investment and tourism to bolster the economy and enable people to sustain their families and communities.”

In conclusion, Bishop Angaelos spoke of Christians in Egypt as those who remain loyal to, and take pride in, their indigenous homeland despite the various challenges faced, saying:

“We speak as Christians with hope, and we have faced persecution far greater than this. We are still there as the largest Christian denomination in the Middle East and as the last actual bastion of Christian presence in the region.”

Shortly after the hearing, and in commenting further on the state of minorities in Egypt, Bishop Angaelos said: 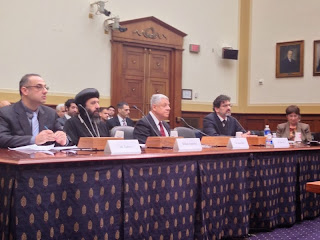 “While we do not seek to place blame on the current leadership, it is evident that over the past decades there has been little done to ensure that these violent acts do not reoccur. Since the uprising, and due to a decrease in law and order resulting from the turbulent period under the rule of Mr Mohammed Morsi, there have been increasing challenges facing Christian and minority groups in Egypt. Having said that, and in looking to the future, we continue to support the current process of rebuilding Egypt with a new constitution and ethos, and support the whole community as it calls for change.
We pray, that with the good intention of all to move past these challenging times in Egypt’s history, the implementation of equality before the law will ensure that Egypt becomes a better place for all citizens on the basis that they are Egyptian before anything else, whether they are the numeric majority or minority, man or woman, young or old, secular or religious, Bahá’i, Christian or Muslim.”

“In order to prevent recurring attacks there must be a process put in place to identify the most vulnerable villages in Egypt that are likely to experience attacks. The Egyptian government should be urged to implement this and the United States may be able to provide resources to help with that process. The Egyptian police also need a security protocol to deal with mob violence and should establish a crisis office within the Egyptian presidency to deal specifically with that issue, as well as the development of a rapid response unit. We also need reform in the legal system, and localised reward and punishment system.”


·         Statement by Bishop Angaelos, highlighting the increasing incitement and violence threatening and claiming the lives of Christians in Egypt. http://bit.ly/1cn7eBf
Posted by The Coptic Orthodox Church Centre at 20:15