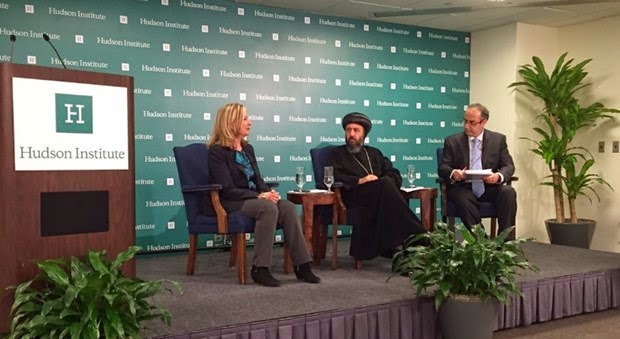 HG Bishop Angaelos met with a number of state representatives and officials in Washington DC and spoke at the National Press Club and the Hudson Institute on 17-18 March regarding the state of Christians in Egypt and the broader Middle East. 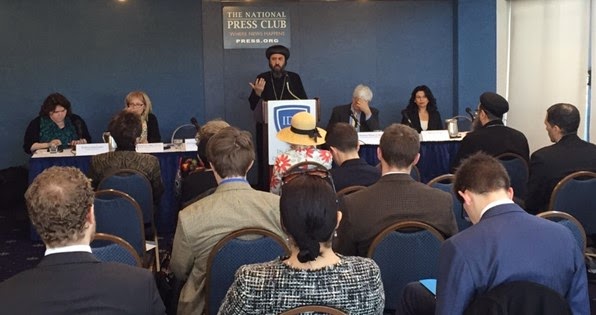 His Grace Bishop Angaelos, General Bishop of the Coptic Orthodox Church in the United Kingdom spoke to an audience of journalists, government representatives, NGO’s and media professionals at the National Press Club in Washington DC on ‘Sensitivity rather than sensationalism in media reporting’. After his address he responded to questions as part of a panel made up of Katrina Lantos Swett, President of the Lantos foundation, Robert A. Destro, Professor of Law and founding Director of the Interdisciplinary Program in Law & Religion at The Catholic University of America’s Columbus School of Law in Washington, D.C, Thomas Farr, Director of the Religious Freedom Project at Georgetown University’s Berkeley Center for Religion, Peace, and World Affairs, Journalist for the National Review, Kathryn Jean Lopez, and Nermien Riad of Coptic Orphans. In his address Bishop Angaelos shed light on the dangers of sensational reporting, and noted the power of journalism in influencing public opinion, generating reactions and directly impacting lives.

Praising journalists for their response to the brutal murder of 21 Coptic Orthodox Christians in Libya, His Grace said: 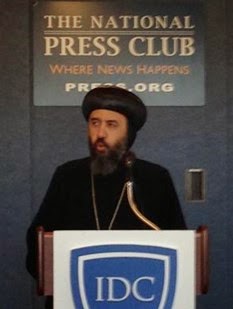 “The Coptic community felt encouraged by the sensitive media coverage of those who were killed in Libya. Their martyrdom was a turning point for the world, and after this atrocity we must realise that news coverage is not merely about headlines, ratings, or statistics, it is about lives.”

He contrasted this with past coverage of events such as the burning of over 100 Churches and places of Christian ministry in Egypt in August 2013 where mainstream media was slow to respond. He went on to say,

“It is important that journalists do all they can to ensure that individuals and communities do not feel forgotten, disregarded or insignificant. There is no ‘one size fits all’ approach to covering the Middle East, and it is important that the media is not selective in reporting atrocities.” 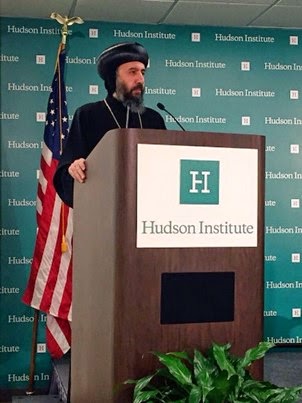 “The answer is not to empty the Middle East of its Christians nor to force them to remain in the region to maintain a presence, but to seek what they desire and enable them to fulfil their own choices, which will vary depending on many factors including where they live and what their experience is.

We must realise that many Christians do not desire to leave their homelands because they are the indigenous people of the region, so let us look at the Middle East within its own context and not impose Western models.”

His Grace concluded with reassuring words of Scripture relating to the state of Christians in the Middle East, saying: ‘We are hard-pressed but not crushed, persecuted but never forsaken’ (paraphrased from 2 Corinthians 4:8-9)

In response Sam Tadros spoke of the importance of safeguarding the rights of Christians in the Middle East due to the impact their presence has on the region, saying: 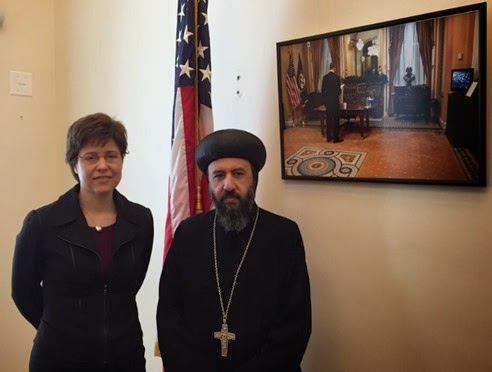 As part of his visit to Washington, His Grace also met with Melissa Rogers, Special Assistant to the President and Executive Director of the White House Office of Faith-based and Neighborhood Partnerships. His Grace also attended a Congressional Hearing after which he met with Ambassador Saperstein, the State Department’s Ambassador-at-Large for International Religious Freedom. 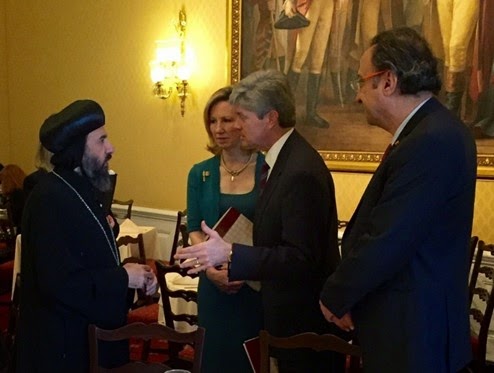 During his visit Bishop Angaelos prayed a vespers service at St Mark's Coptic Orthodox Church and preached on the life of the Cross and the recent martyrdom of 21 Coptic men in Libya.

Posted by The Coptic Orthodox Church Centre at 16:50