PRESS RELEASE
For immediate use

Victims of religious persecution remembered during the annual Coptic New Year service at St Margaret’s Church, Westminster Abbey on 22 October 2015 with messages from HRH The Prince of Wales, Prime Minister David Cameron, and The Archbishop of Canterbury. 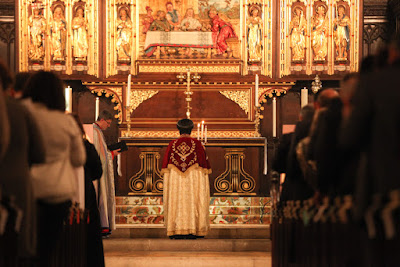 In his sermon to members of the House of Lords, House of Commons, members of the diplomatic corps and various ecumenical, inter-religious and official guests, His Grace Bishop Angaelos, General Bishop of the Coptic Orthodox Church in the United Kingdom, marked 2015 as a year of commemoration, marking the Centenary of the Armenian Genocide and the end of WW1, as well as the year in which the United Kingdom celebrates HM The Queen as its longest reigning monarch. He continued that it is also a year that will be commemorated in history with regards to matters of international religious freedom.

Speaking about the brutal murder of Coptic and Ethiopian Christians in Libya earlier this year he said: 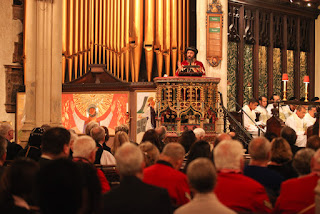 “This has been a year during which a line of unparalleled evil has been crossed, and this has touched us all personally.

It is also a year during which there has been an expression of solidarity from prominent figures, including His Royal Highness, the Prince of Wales and Prime Minister David Cameron, along with the vast breadth of the Christian family in Britain and around the world, and brothers and sisters from a multitude of faiths.

We must however see this as a year of opportunity, to break the darkness that increasingly surrounds us day after day with light and hope. This is a time for us all to stand in solidarity.”


“We welcome the fact that our nation has decided to accept 20,000 refugees, and undoubtedly we need to do more, but let us be thankful for the start of this initiative and continue to work together to help those most vulnerable.” 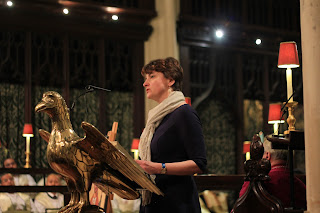 In a message from the Right Honourable David Cameron, Prime Minister, read by The Baroness Berridge of The Vale of Catmose, the following was said:


“I recognise that this is one of the most auspicious days within the Coptic Calendar and an important occasion not only to give thanks, but also to remember those who suffer for their faith around the world.”


“I believe that our communities here in Britain and abroad have been strengthened by the strong voice and leadership provided by the Coptic Orthodox Church.”

In a message from The Most Rev. and the Rt Hon. the Archbishop of Canterbury, read by The Right Reverend Christopher Chessun, the Coptic New Year was spoken of as an occasion for thankfulness, yet also:


“…one of somber commemoration of the martyrs of the past two millennia, particularly the Armenian martyrs and our Coptic and Ethiopian brothers in Christ who recently gave their lives in Libya …For us it is a reminder to be persistent in our commitment to prayer and solidarity.” 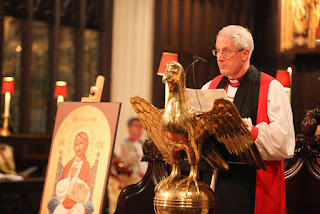 Bishop Christopher, in his address, thanked the leadership of the Coptic Church for:


“…drawing attention to the struggles and challenges faced by people in the Middle East, both Christians and others, and in particular the plight of refugees from the nations of the Middle East.”

Baroness Berridge, Co-Chair of the All Party Parliamentary Group for International Freedom of Religion or Belief spoke of the many unable to worship freely in the Middle East, saying:

Referring to the OBE conferred upon Bishop Angaelos by Her Majesty The Queen, Baroness Berridge also mentioned that this is the first time that such an award has been given for International Religious Freedom, expressing that it is indicative of the times and in recognition of the work that has been done by Bishop Angaelos and the Coptic Orthodox Church.

Referring to the work of the APPG and the role of the Coptic Church, she went on to say:


“In our country we have been given the resources to do the work that we need to do, but it is only through the generosity of others that we can do that work, and I do want to pay tribute for the continued and faithful support of the Coptic Orthodox Church for the parliamentary work here in the UK.” 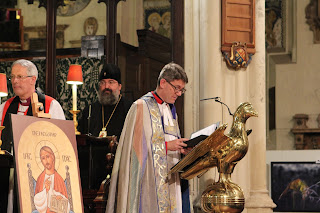 The service commenced with a welcome and short address from The Reverend Canon Andrew Tremlett, Canon of Westminster & Rector of St Margaret’s Church, who said:


“…the continuing events of the Middle East bring into sharp focus the need for prayer, solidarity, and common cause which tonight’s service represents.”

Posted by The Coptic Orthodox Church Centre at 15:34