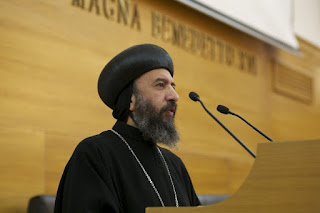 After a short introduction by Daniel Philpott, Associate Professor of Political Science and Peace Studies at the University of Notre Dame, His Grace Bishop Angaelos, General Bishop of the Coptic Orthodox Church in the United Kingdom, gave an address titled ‘Christians in the Middle East: Light in darkness, hope in despair’.

During his address, he said:

“The world seems to suddenly be waking up to the fact that there is a problem in the Middle East. That problem, however, did not start with the mass exodus of Christians from Mosul, because there has been a systematic and systemic persecution of Christians throughout the Middle East over decades and indeed over centuries. This ethnic cleansing is an accumulative effect and our silence has been a contributing factor to what we are seeing today.”

Highlighting the extent of persecution facing Christians in the Middle East, he went on to say:

“That said, I welcome the recent steps taken to present the actions of the caliphate to be those of genocide. I also welcome even more strongly, the efforts in the past few days that have sought to ensure that Christians are not excluded from that equation.”

In speaking of a solution to the Middle East crisis, Bishop Angaelos said:

“We cannot export models of what we consider to be viable democratic process to a region that is governed by its own demographics, dynamics and understanding of what religion is and where it belongs, both in society and in the lives of individuals.”

Calling for a collaborative response to the situation, he continued:

“There is a growing disregard for the sanctity of life, and that must be what offends us. It is not about Christians or Muslims being killed, but about life and humanity as God’s creation, and that disregard is a violation that we cannot be silent about. In response we must realise that we have to respond together, collaboratively.”

“We must come out of the mentality that speaks of a Christian West and a Muslim East. The Body of Christ is one that feels pain equally and is affected equally by these horrible acts.”

Shedding light and hope on the situation he said:

“The response we have seen to the attacks in Paris, in the United States, throughout Europe and around the world indicates that there is an inextinguishable mercy that exists within the human being that rejects this kind of rampant and indiscriminate violence.”

Speaking of the Christian calling to advocacy Bishop Angaelos said:

“When we are speaking for others, we have a moral responsibility to be advocates, in the model of our Lord Jesus Christ Himself, Who speaks for those who cannot speak, and in a phrase commonly used these days, He is a voice for the voiceless.”

“In the 21st Century we should not just be speaking about human rights because life in itself is not a luxury; to live is a right and to live with dignity is a God-given right that we all receive. In our discourse we should not merely talk about provision but prosperity, not about protection but safety, or about survival but dignity; these should be the baseline of our efforts.”

Offering words of encouragement to all those working tirelessly in the area of religious freedom, and quoting Scripture, he said:

“We give thanks to God always for you all, making mention of you in our prayers, remembering without ceasing your work of faith, labour of love..." (1 Thessalonians 1:2-3)

Giving thanks and paying tribute to Christians in the Middle East, Bishop Angaelos concluded:

"You are ‘hard-pressed on every side, yet not crushed…perplexed, but not in despair; persecuted, but not forsaken; struck down, but not destroyed...’”(2 Corinthians 4:8-9)

The Conference, themed ‘Under Caesar’s Sword: Christians in Response to Persecution’ took place at the Pontifical Urban University in Rome, Italy, from 10-12 December 2015, organised jointly by the Centre for Civil and Human Rights at the University of Notre Dame and the Religious Freedom Project at the Berkley Centre for Religion, Peace, and World Affairs at Georgetown University. The conference was co-sponsored by the Community of Sant'Egidio.

*Ends*
Posted by The Coptic Orthodox Church Centre at 16:00