HG Bishop Angaelos took part in 'High-Level meeting' at the European Parliament regarding the worldwide persecution of Christians, and later spoke at the Maranatha Community Annual Lecture in Manchester on the role of Faith in Politics.

Contributors spoke on the condition of Christians facing persecution across the world, and provided case studies for the Balkans, Pakistan, Sinai, Iraq, and Eritrea. At the meeting, HG Bishop Angaelos stressed the essential need for collaborative advocacy in efforts to help those persecuted worldwide.

After the meeting Bishop Angaelos spoke with both the President and Vice-President of the European Parliament of the need to find ways of future collaboration and co-operation. Speaking from Brussels Bishop Angaelos went on to say: 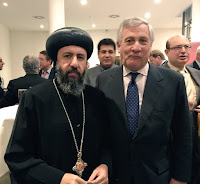 “It was an effective gathering of people who are very active and committed to working for the persecuted and vulnerable around the world. What is clear however, is that we need to continue finding ways to collaborate without losing the individuality of organisations, but in such a way as to maximise the impact of our combined efforts.”

Later in the day, Bishop Angaelos returned to the United Kingdom to deliver the annual address at the annual Maranatha Community Lecture on ‘Faith in Politics.’

Speaking on the role of Faith in politics he said:

“Our Christian Faith is an intrinsic part of who we are, as created in the Image and Likeness of God, and so it is meant to be indivisible from who we are and what we do at all times. Our Faith must always determine our ethics, morals, principles and actions.”

“It is within the context of our Faith, forming our identity, that we must speak boldly, but doing so in a way that makes sense to those listening. In presenting our principles, aspirations and demands, what we say must always be relevant and gracious, and spoken in such a way that ensures it is heard and understood.” 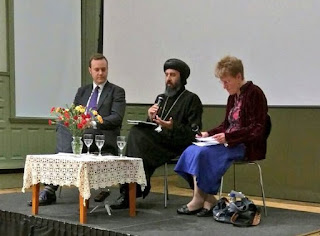 Speaking about advocacy and politics, he went on to say:

“Christians have a responsibility to advocate and speak for the rights and freedoms of all those for whom those rights are threatened or violated, regardless of their religion. We should be able to speak for justice, equality and God-given human rights, as this is core to our Faith. Religious leaders must act as a moral compass, not a driving force affected by party politics...”

Bishop Angaelos concluded with a passage from Scripture, highlighting the power and beauty of unity and the boldness of true witness:


“When the Day of Pentecost had fully come, they were all with one accord in one place…And they were all filled with the Holy Spirit and began to speak with other tongues, as the Spirit gave them utterance... And they continued steadfastly in the apostles’ doctrine and fellowship, in the breaking of bread, and in prayers…and many wonders and signs were done through the apostles.” (Acts 2:1,4,43)

Posted by The Coptic Orthodox Church Centre at 11:13