Press Release: HG Bishop Angaelos conferred the Lambeth Cross for Ecumenism by HG the Archbishop of Canterbury at Lambeth Palace days after receiving the Coventry Cross of Nails at Coventry Cathedral

The Lambeth Cross for Ecumenism was conferred upon His Grace Bishop Angaelos, General Bishop of the Coptic Orthodox Church in the United Kingdom, by the Archbishop of Canterbury, the Most Reverend and Right Honourable Justin Welby, on 31 March 2016 at Lambeth Palace. The Lambeth Cross has been the highest honour bestowed by the Archbishop of Canterbury since 1939 and is conferred to distinguished hierarchs who have rendered exceptional services to the cause of Christian unity.

Speaking directly to Bishop Angaelos in an interview after conferring him with the Lambeth Cross the Archbishop said:

“My encounter with Orthodoxy through you has been a really profound experience in my life. It has changed much of my understanding of what the Church is universally. I have never had that much engagement with Orthodoxy, and certainly not with Coptic Orthodoxy. I found a completely different understanding, a much deeper sense of being drawn into the Body of Christ, and this is a recognition of the importance of your role in presenting to the United Kingdom and to the Church that we belong to one another in Christ.”

Speaking of the effect of his encounter with Orthodoxy, Archbishop Justin went on to say:

“[this] has been a major step forward in my own spiritual journey, and His Grace has been a major feature in that; and it is part of what he has done in England across many communities, including of course with His Royal Highness the Prince of Wales.”

In response to the Archbishop’s comments, Bishop Angaelos said: 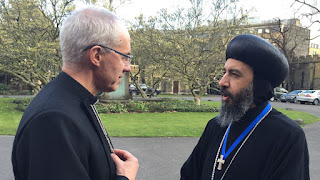 “This has been a wonderful time for a great partnership. The fact that there is an opportunity to work with Your Grace, with the Church of England, and with the Anglican Communion worldwide to advocate for others is wonderful because it comes at a time at which we must stand together. Your Grace and the Church of England have been very vocal on these issues, along with, as you mentioned, His Royal Highness the Prince of Wales. It is time for us to speak collaboratively and powerfully. It is only by the world seeing us standing together and witnessing that what we have in common is more than what separates us, that it realises that we have common ground, especially for those who are not so privileged as we are to speak.” 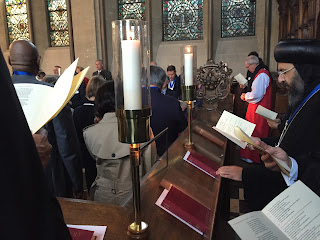 The ceremony was followed by evensong in the Archbishop’s Chapel and a reception in the Guard room, after which Bishop Angaelos said:

“I am honoured and humbled to receive the Lambeth Cross from His Grace the Archbishop of Canterbury. I believe this is a crucial time for us to work and witness together as Churches, Christian leaders and Christians as a whole, to send a more positive and encouraging message of who we are and what we stand for, and to speak for those who struggle here in Britain, in the Middle East and around the world. We are very fortunate to have strong ecumenical ties in Britain, and a visible unity and collaboration that makes the Church relevant and its input effective, and for this we must all be extremely thankful.”

“At a time of increasing challenge and darkness, when there appears to be no hope, and those who threaten us appear to be stronger, our hope and strength lies well and truly in our unity, in our shared vision, and in our commitment to do what we can, not only for ourselves but for the world around us.”

Earlier in the week, after having preached at the Easter Sunday Coventry Cathedral service at the invitation of the Bishop of Coventry, His Grace Bishop Christopher Cocksworth, Bishop Angaelos was also awarded the Coventry Cross of Nails in recognition of his work on reconciliation by the Dean of Coventry Cathedral, the Very Reverend John Witcombe. The Coventry Cross of Nails is recognised throughout the world as a symbol of peace and reconciliation. Although it has been awarded to hundreds of charities and organisations over many years, it is only rarely presented to individuals.

“Building bridges, forging relationships and engaging in partnership and collaboration is something I believe we must all be committed to on a daily basis. I am thankful to be surrounded by many good friends with whom I work so closely and am honoured to have received this recognition from not only the ‘Archbishop of Canterbury’, the ‘Bishop of Coventry’, and the ‘Dean of Coventry’ but from dear friends and brothers in a shared ministry and witness.”

These two awards were preceded by Bishop Angaelos being conferred the honour of Officer of the Most Excellent Order of the British Empire for ‘Services to International Religious Freedom’ by Her Majesty The Queen in 2015. These three awards represent three core components of His Grace’s ministry: Ecumenism, Reconciliation and Religious Freedom, alongside his pastoral and youth ministry.

Posted by The Coptic Orthodox Church Centre at 15:55