Press Release: HG Bishop Angaelos gives Keynote Address on the persecution of Christians in the Middle East to over 700 MPs and other guests in the Houses of Parliament, later addressing 50 High Commissioners and Ambassadors in the State Rooms at the Palace of Westminster

HG Bishop Angaelos gives Keynote Address on the persecution of Christians in the Middle East to over 700 MPs and other guests in the Houses of Parliament, later addressing 50 High Commissioners and Ambassadors in the State Rooms at the Palace of Westminster 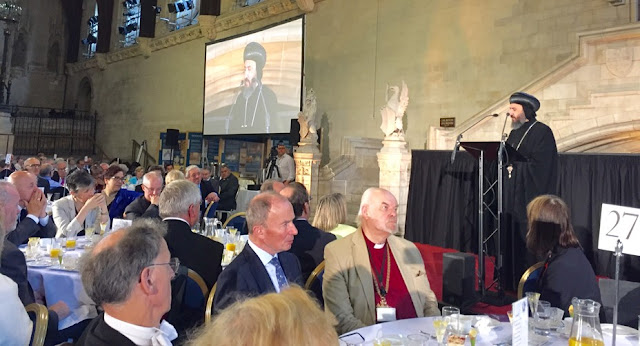 On 14 June 2016 His Grace Bishop Angaelos, General Bishop of the Coptic Orthodox Church in the United Kingdom, delivered the keynote address on the situation of Christians in the Middle East at the annual National Parliamentary Prayer Breakfast (NPPB).  During his address Bishop Angaelos spoke specifically on the persecution of Christians and minority communities, and the millions subsequently displaced and living as refugees. His Grace addressed an audience of over 700 attendees including Members of the House of Lords, House of Commons, civic and faith leaders, ambassadors, and CEOs of advocacy organisations and NGOs. The Archbishop of Canterbury was also in attendance. The gathering was welcomed by the Lord Speaker, the Speaker of the House of Commons, and Fiona Bruce MP, Chair of this year’s Parliamentary Breakfast.

The NPPB is the largest gathering of any kind in parliament throughout the year. The event is held with the permission of the Speaker and the Lord Speaker and is an annual recognition of the contribution that Christianity makes to the national life of the United Kingdom. While themes of previous events have focused on topics of national impact, this is the first to address a global issue of this scale.

In his welcome, The Right Hon John Bercow, Speaker of the House of Commons, said:
“‘The Church in the Middle East’ is a theme never more relevant than it is today. It is a magnificently chosen theme that will continue to be relevant at least until some of the prevailing discord…of which certainly there is an abundance, is either moderated or better still overcome altogether.”

In her welcome, The Lord Speaker, The Baroness D’Souza said:
“This breakfast theme…could not be more timely to explore the need for tolerance and understanding. I greatly look forward to hearing…as to how we make steps, if not leaps, towards this.”

In her welcome, Fiona Bruce MP highlighted that the attendance at this year’s Breakfast surpassed previous years, with over 150 MPs and peers and 730 people in attendance, saying:
“It is particularly encouraging that so many members of parliament are attending together with religious leaders from their constituencies…the fact that so many parliamentarians and peers are here today does, I believe, confirm their deep concern…”

“Let us seek to ensure that we in the United Kingdom are doing everything we can to stand up and be a voice for the voiceless in the Middle East, both to those who share our Faith, and those of other faiths or none.”

Speaking of the work that Bishop Angaelos has done in the area of religious freedom, she continued:
“I am particularly delighted and grateful that His Grace Bishop Angaelos will address us this morning as he has tirelessly advocated on behalf of the Church throughout the Middle East in recent years…”

In his address, Bishop Angaelos spoke directly to parliamentarians saying:
“We often hold you to account for the decisions you make, yet often forget to hold ourselves to account to pray for you as you make those decisions. In the coming weeks those prayers will be more important because of the decisions that are going to be made for the future of Britain.”

He continued:
“As religious and civic leaders, we have an opportunity and responsibility to change the narrative and expectation of the Middle East from one of hopelessness and conflict to one of hope and promise.

We need to address the reality of this situation, that there has been a systemic, yet gradual prejudice, marginalisation and alienation of Christians and minorities allowed to continue over decades. This does not have to continue on our watch…”

Calling for collaboration, he went on to say:
“We must realise that the current situation is greater than us all; it needs us all to work together…There can no longer be a concept of ‘over there’ because families of those affected in the Middle East are members of your constituencies, our Churches, and our society as a whole…We are one very large community…our paths cross, our experience is one and our journey is one that we must share.”

“Regardless of which House one sits in, which Church one worships in, or indeed which faith one does or does not have, we must work together for the freedom and dignity of human life and speak with a collaborative voice.”

Elaborating of the calling and responsibility of Christians to advocate indiscriminately for all, Bishop Angaelos said:

“We are called in Scripture (Luke 4:18) to follow in the footsteps of our Lord Jesus Christ, Who came to ‘preach the gospel to the poor…heal the broken-hearted…proclaim liberty to the captives…set at liberty those oppressed.’ To be a Christian is to be an exceptional human being at the service of all humanity, for even the ‘Son of Man did not come to be served, but to serve, and to give His life a ransom for many’ (Mark 10:45)”


“Our struggle is not just for Christians, but for human dignity. To pursue God-given rights is to serve the whole of humanity indiscriminately. As a Christian I cannot be selective as to who I love, honour or even forgive, as we are instructed by our Lord to ‘love our neighbour as ourselves.’ “There is no other commandment greater…” (Mark 12:31).

After the event Bishop Angaelos spoke to 50 High Commissioners and Ambassadors from a variety of faith traditions at a separate event in the State Rooms of the Palace of Westminster.

Photos, video and audio will be made available soon. E-mail Media@CopticCentre.com for more information.

Posted by The Coptic Orthodox Church Centre at 14:35