After months of waiting, the Coptic Libya Martyrs were finally repatriated to their homeland of Egypt yesterday. They were received by His Holiness Pope Tawadros II, Pope of Alexandria and Patriarch of the See of Saint Mark, members of the Holy Synod, and representatives of the broader Coptic Orthodox Church, on the tarmac of Cairo International Airport. The welcome was amidst appropriately joyous hymnology reflecting the period between the Coptic Orthodox Feasts of the Resurrection and Pentecost.

This is indeed a bittersweet occasion for the families of these brave men, their communities, the broader Coptic Orthodox Church, and Egypt as a whole, who saw them brutally and publicly executed before the eyes of the whole world for their Christian Faith. Having been made “a spectacle to the world, both to angels and to men” (1 Corinthians 4:9).

While this public spectacle was intended to humiliate our brothers in Libya and intimidate their families, their Church, and Christians around the world, it actually became an opportunity for an incredibly valiant witness by those who accepted their deaths so bravely while calling on their Lord and Saviour to their last breath. Not only were their actions courageous, but their families subsequently presented a gracious message of Christian love and forgiveness, amidst their personal grieving and loss, that moved the world. In their remarkable example, they obeyed the commandment to us all, to: “love your enemies, bless those who curse you, do good to those who hate you, and pray for those who spitefully use you and persecute you” (Matthew 5:44).

This historic event also provided an opportunity for a deep and genuine unity among the Christian Church worldwide, and amongst all people of Faith and none, who rejected the inhumanity of this very public crime that violated every understanding of the dignity and sanctity of life as we know it. 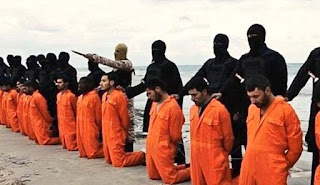 All in all, the death of these brave Coptic Christians and their Ghanian friend, Matthew, in February 2015, represented a turning point for many and an awakening for the world.

They will, for the remainder of my life, be an inspiration and an example of true, simple and faithful witness in the midst of what can sometimes be an unaccepting, cruel and brutal world. Their witness has shown that darkness can always be broken by the light of Christ that can indeed shine through each and every one of us.

We pray protection for all those around the world who continue to be persecuted for their Christian Faith, religious affiliation, or for any other reason, for those who remain abducted and their families as they anxiously await news, and for a change of the hearts and minds of those who continue to perpetrate these and similar crimes around the world. We also pray for those receiving their fathers, sons and brothers today, and for the repose of our brothers, the Libya martyrs.

May they rest in peace and rise in Glory. 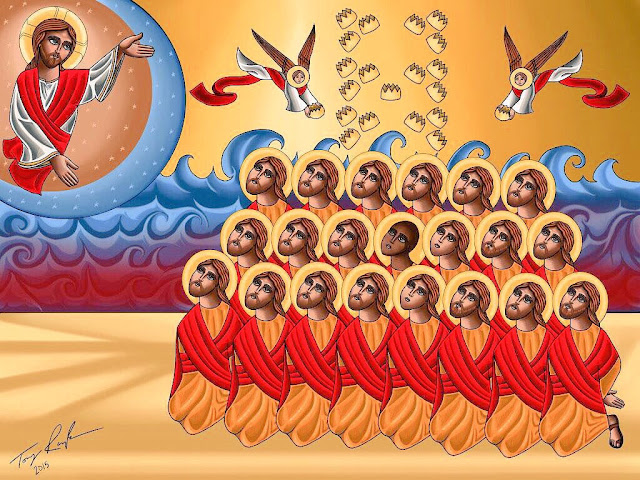 Posted by The Coptic Orthodox Church Centre at 16:01