Press Release: His Eminence Archbishop Angaelos OBE invested as Knight Grand Cross of the Royal Order of Francis I 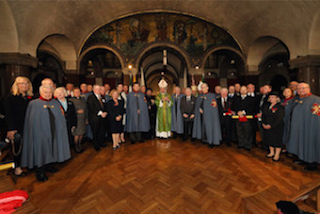 Faith leaders and politicians gathered on 15 November 2018 for an investiture Mass at Westminster Cathedral. Twenty nine individuals from across Britain and Ireland were honoured with either a Roman Catholic or interfaith order of knighthood.

Archbishop Angaelos was the keynote speaker during the gala dinner held at the Armourers’ Hall in London following the investiture. During his address, His Eminence spoke on the plight of Christian communities in the Middle East. He also spoke of the valuable interfaith role that the Constantinian Order of St George and its Delegate to Great Britain, Mr Anthony Bailey OBE, has carried out for years.

“I was honoured to have received this award from the Constantinian Order, knowing the breadth and value of its work, and most recently for Christians in the Middle East. I have always found the Order to be a faithful advocate and voice for the voiceless under the leadership of its Delegate Mr Anthony Bailey. I pray God’s blessing upon the Order, and upon its work throughout Britain and the world.”

Posted by The Coptic Orthodox Church Centre at 16:54