In the lead up to the anniversary, three linked events were held this week in honour of the 21, launching a book originally written in German by Martin Mosebach called ‘The 21’, translated into English by Plough Publishing House. Discussions around the importance of freedom of religion or belief were also facilitated throughout the week’s proceedings. 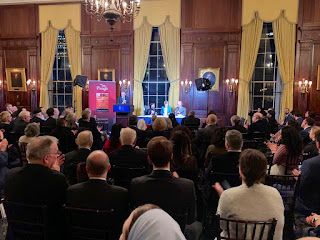 The first was held in the Union League Club in New York on 11 February 2019, featuring a discussion between author Martin Mosebach and His Eminence Archbishop Angaelos, Coptic Orthodox Archbishop of London. The discussion was moderated by journalist Eliza Griswold of the New Yorker, and closing remarks were made by R.R. Reno, the editor of First Things magazine.

Following on from New York, an event was held on 12 February 2019, at the National Press Club, Washington DC.  Martin Mosebach discussed ‘The 21’ with Kent R. Hill, Executive Director of the Religious Freedom Institute (RFI), and an address was delivered by Archbishop Angaelos, who drew attention to the plight of Christians in the Middle East, with a particular focus on Egypt. Addresses were also given by Ambassador Sam Brownback, Ambassador at Large for International Religious Freedom, and Mariz Tadros, Research Fellow, Institute for Development Studies. 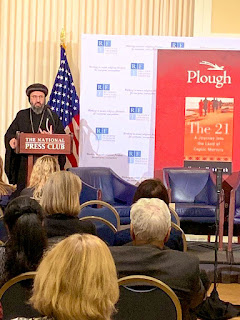 The week’s events ended with a book launch and reception on 14 February 2019 at Lambeth Palace in London, where members of the public, advocacy organisations, ambassadors, members of the House of Lords, and heads and representatives of a variety of Churches and denominations, gathered to hear about the book, along with addresses.

The welcome to Lambeth was made by The Right Revd Nicolas Holtam, Bishop of Salisbury, on behalf of the Archbishop of Canterbury. Addresses were made by Bernard Hibbs, on behalf of the Bruderhoff Community, author Martin Mosebach, His Grace Bishop Hovakim Manukyan, Primate of the Aremenian Apostolic Church in Great Britain, Baroness Berridge of the Vale of Catmose, Co-chair of the All Party Parliamentary Group for Religious Freedom or Belief, His Excellency Mr Tarek Adel, Ambassador of the Arab Republic of Egypt to the United Kingdom, and His Eminence Archbishop Angaelos, Coptic Orthodox Archbishop of London.

When asked about the significance of the events of the week, Archbishop Angaelos said:

“The 21 Libya martyrs have given the world an example of faithful, resilient Christian witness, that has touched and brought together the full breadth of Christian expression around the world. Their moving solemn prayers in the face of imminent death, have not only resonated with Christians, but have also encouraged people of all faiths to stand for one another.

I am grateful for their witness, and for all those who have sought to make a positive difference in the world as a result of the 21, and continue to be inspired by their families who chose to forgive the perpetrators of this heinous crime. I am reminded of the encouraging passage in 1 Corinthians 15:54-55, which highlights the paradox of Christianity, that there is victory even in death: “Death is swallowed up in victory. O Death, where is your sting? O Hades, where is your victory?”

The three events this week have shown that although the murder of the 21 was tragic, their witness has led to fruitful, committed collaboration around the world in order to prevent similar tragedies occurring again in any community.

I am grateful for the faithful depiction presented by Martin Mosebach, of these courageous men, their families, communities and Church, and the Bruderhoff community for having taken the initiative to publish this work.” 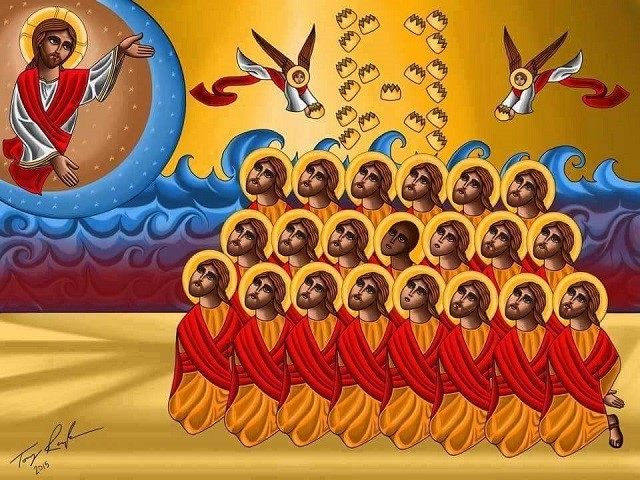 Posted by The Coptic Orthodox Church Centre at 16:55