The Coptic Orthodox Church marks ‘Contemporary Martyrs Day’ convened by HE Archbishop Angaelos, with Messages from His Holiness Pope Tawadros II, and His Holiness Pope Francis, and addresses by The Archbishop of Canterbury, Cardinal Koch, Fiona Bruce MP, The Bishop of Truro, and a panel of distinguished guests


The Coptic Orthodox Church marks ‘Contemporary Martyrs Day’ with Messages from His Holiness Pope Tawadros II, and His Holiness Pope Francis, and addresses by The Archbishop of Canterbury, Cardinal Koch, Fiona Bruce MP, The Bishop of Truro, and a panel of distinguished guests

Archbishop Angaelos gave context to the webinar by explaining that advocacy initiatives on behalf of the Coptic Orthodox Church stem from centuries of persecution experienced by its community, saying:

“The Coptic Orthodox Church is in a unique place, through its own experience of persecution across the centuries, to speak for those of all faiths and none who continue to suffer today, and it is for this reason that we gather to raise awareness and advocate for those who are not in a position to speak for themselves.”

Addresses from the panel focused on Freedom of Religion or Belief in the broadest sense, touching on communities that continue to suffer marginalisation and persecution as a result of their religious beliefs, especially the ongoing plight of Christian communities worldwide; approximately 80% of the world’s persecuted religious believers are Christian, as documented in The Bishop of Truro’s report[1]. Speakers also addressed the plight of the Uighur and Rohingya Muslim communities, and others that are suffering ongoing violations of their religious freedoms.

The Most Reverend and Right Honourable Justin Welby, Archbishop of Canterbury
His Eminence Cardinal Koch, President of the Pontifical Council for Promoting Christian Unity
His Excellency Archbishop Claudio Gugerotti, The Apostolic Nuncio to Great Britain
His Eminence Archbishop Angaelos, Director of Refcemi and Coptic Orthodox Archbishop of London
The Rt Revd Philip Mounstephen, The Bishop of Truro
The Lord Alton of Liverpool, UK House of Lords
Fiona Bruce MP, Prime Minister’s Special Envoy for Freedom of Religion or Belief
Mervyn Thomas CMG, Founder President of Christian Solidarity Worldwide
Neville Kyrke-Smith, Chairman of Aid to the Church in Need
Martin Mosebach, Author of ‘The 21’

For all messages and addresses in full, watch the webinar here: https://youtu.be/wRR0Om67gwQ

In his message, His Holiness Pope Tawadros II emphasised the importance of keeping the Church’s history and heritage of martyrdom alive and in the consciousness of its members so as to inspire and encourage Faith in adversity. His Holiness also spoke about the many ways in which Christians can live a faithful life of witness, and shared contemplations on what the martyrdom of the men in Libya means for the Christian family of believers.

Reflecting on martyrdom His Holiness said:

“It is true that we are proud of the Faith of all martyrs, who can face death with courage to witness to their Faith, yet we cannot by any means tolerate persecution, a word that should be wiped out of the dictionary of humanity. We also have great faith in the value of human life, which is a gift from God and no man has the right to end human life by any means.

It is well understood by all Christians that witnessing our Faith in the Lord Jesus Christ is joyful, even if it is through giving our life. That is why we today celebrate the commemoration of our beloved martyrs of Libya, and all martyrs of Faith with complete understanding of the verse ‘For me to live is Christ, and to die is gain’ (Philippians 1:21).”

Contemplating on the life and witness of the Libya Martyrs, His Holiness Pope Francis said:

“They, are our Saints, Saints belonging to all Christians, Saints of all Christian denominations and traditions. They are those who have washed their lives white in the blood of the Lamb…they have received the greatest gift a Christian can ever receive: to bear witness to Jesus Christ to the point of giving his own life.”

“I thank the bishops, and the priests of our sister Coptic Church who have brought them up, and taught them to grow in the Faith. And I thank the mothers of these men, these twenty-one men, who have passed the faith to them…in a dialect which goes beyond languages, the dialect of belonging.

“I join all of you, my brother bishops, present at this commemoration. To you, great and beloved Tawadros, my brother bishop and friend. To you, Justin Welby, who also wanted to participate at this meeting. I also join all the other bishops and priests, but above all the holy faithful people of God who in its simplicity, with its fidelity and infidelities, with its graces and sins, carries forward the confession of Jesus Christ: Jesus Christ is Lord.”

The Lord Alton of Liverpool spoke of the ongoing plight of the Muslim Uighur community, and other persecuted communities in various parts of the world. He also highlighted the witness of Matthew Ayariga, a man from Ghana who was martyred alongside the 20 Coptic Christians on 15 February 2015, saying:

“It was so fitting that, in September 2020, Matthew’s mortal remains were taken to Egypt so that he could be buried, alongside those other remarkable men, in the church of the Martyrs of Faith bult in Al Our.  For me, the key point about Matthew Ayariga was that in a truly remarkable – supreme - act of solidarity he was willing to give his liberty and his life rather than walk away from his Coptic brothers. What a contrast to our indifference to the persecution of 250 million Christians worldwide.”

“His act of extraordinary solidarity shames so many of us when we consider our tepid response – often based on political expediency, institutional considerations, or trade and business – to the persecution which is experienced by religious and ethnic groups the world over – discrimination that morphs into persecution; then persecution which morphs into crimes against humanity; and then ultimately into the crime above all crimes, genocide.”

“The Coptic tradition of Christianity has so much to teach us – not least their experience and understanding of endless centuries of discrimination, persecution, and martyrdom…Heroic bravery in the face of evil demands a better response from us – even if it is only a pale imitation of the remarkable act of solidarity by Matthew Ayariga on that deadly beach in Libya in 2015.”

Reflecting on ‘the ecumenism of blood’, The Most Reverend and Right Honourable Justin Welby, Archbishop of Canterbury said:

“The reality of the ‘ecumenism of blood’ is felt on this day as we commemorate the modern martyrs. It reminds us, and I am reminded too by a fellow bishop in the Church of England who is themselves from a family where there is a modern martyr, that ecumenism and solidarity are with the persecuted, for we are united to them by their blood, it is not just something we feel for the persecuted, or that we stand towards the persecuted; with is the key word.”

“If we are going to be with them, whether it is the 21 martyrs in Libya, and I still remember the horror of that news, or whether it is in Nigeria, or so many other parts of the world, we are there to listen as well as to speak ---more to listen, to be in solidarity with them.”

Quoting the Prime Minister, she continued:

“We all know that wherever Freedom of Religion or Belief is under attack, other human rights are under attack as well. We will continue to work closely with like-minded partners to stand up for members of such marginalised communities.”

Highlighting the worsening situation of certain marginalised communities, a result of the Covid-19 pandemic and the scapegoating and discrimination they are facing in terms of receiving food, aid and healthcare, the Prime Minister’s Special Envoy said:

“And yet, may I encourage you that today there is also growing international awareness of such violations and increasing advocacy on behalf of victims of persecution and the UK is showing itself to be a global leader in this, protecting and promoting Freedom of Religion or Belief is a key human rights priority for our Government.”

The Rt Revd Philip Mounstephen, The Bishop of Truro, who was tasked with ‘The Independent Review of the Foreign and Commonwealth Office Response to Christian Persecution’, spoke of the steps that the UK Government is taking to promote Freedom of Religion or Belief, especially in light of the Truro Report, and said:

“The net result of all this is that the fundamental human right of Freedom of Religion or Belief and a recognition of its widespread abuse is on the political agenda in the UK in a way that it simply has not been before, and furthermore it would now be very hard to remove it from that agenda. Perhaps the key recommendation of my review is that implementation should be fully reviewed three years on from publication; so the clock is ticking and it is absolutely vital that this issue remains high on the political agenda.”

His Eminence Archbishop Angaelos, Director of Refcemi and Coptic Orthodox Archbishop of London concluded the webinar by saying:

“What we are talking about here is not an attack on the Coptic Orthodox Church, or Coptic Orthodox Christians, because there is no monopoly of suffering or persecution. For to persecute is to dehumanise, to commodify, to take away the image and likeness of God that is within and that is at the core of our humanity.”

“As Christians this is our calling, who we are, we would not be true to ourselves if we do not advocate and stand together for people of all faiths and none, because we all share that humanity…when we stand against oppression and against persecution, we gain, because our humanity is enriched.”

“We are hard-pressed on every side, yet not crushed; we are perplexed, but not in despair; persecuted, but not forsaken; struck down, but not destroyed” (2 Corinthians 4:8-9) 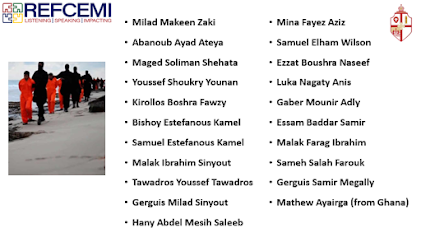 The Bishop of Truro’s Independent Review for the Foreign Secretary of FCO Support for Persecuted Christians: https://christianpersecutionreview.org.uk/report/

6 March 2015: HRH The Prince of Wales and The Archbishop of Canterbury support appeal for families of those brutally murdered in Libya https://copticcentre.blogspot.com/2015/03/hrh-prince-of-wales-and-archbishop-of.html

15 May 2018: Comment by HE Archbishop Angaelos on Bodies of Libya Martyrs Repatriated to Egypt https://copticcentre.blogspot.com/2018/05/comment-by-he-archbishop-angaelos-on.html

Posted by The Coptic Orthodox Church Centre at 22:20