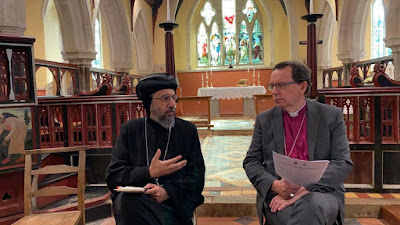 His Grace the Bishop of Truro, the Rt Revd Philip Mounstephen, and His Eminence Archbishop Angaelos, Coptic Orthodox Archbishop of London, jointly hosted the G7 Prayer Breakfast at St Hilary’s Church in Cornwall on 13 June 2021, featuring a keynote address from Nury Turkel, Commissioner on the United States Commission for International Religious Freedom (USCIRF).

In his welcome remarks to both in-person and online attendees, Bishop Philip said:

“Welcome to Cornwall. The world’s spotlight is on this beautiful part of the world at the moment, and rightly so; particularly because of the G7 taking place just a few miles up the road. It is very appropriate that we look today at this vital international issue (of Freedom of Religion or Belief), as it were, on the fringes of the G7, so that we can continue to advocate for keeping this vital issue at the centre of the world’s political agenda where it deserves to be.”

After opening the event with prayer, His Eminence Archbishop Angaelos remarked on the importance of the ‘Independent Review into the Persecution of Christians’, led by the Bishop of Truro, saying:

“It flagged up what we all knew, that Christians around the world were persecuted, and continue to be persecuted, but it also presented the opportunity to look at this issue through a lens of Freedom of Religion or Belief (FoRB) for all. As I always say, ‘as Christians there is nothing more un-Christian we can do than not stand for others’, even if those ‘others’ choose to decline our faith. Our Lord Himself gives us all the opportunity to reject Him.”

Speaking of the role of Christians to advocate, the Archbishop continued:

“What is at the very heart of this matter is that these freedoms are indeed enshrined in conventions, laws and rules, but in actual fact, are God-given, and given equally to all. So we must do all we can, as people of faith or of none, to ensure that the rights we have, or in fact, in our situation in the Coptic Orthodox Church, have been deprived of at times, are valued enough to secure them for others who are on the receiving end of persecution.”

The Archbishop went on to speak about the need for a holistic approach to combat FoRB violations worldwide, urging that actions taken must be collaborative between civil society, policy makers, religious leaders, NGOs, state actors and more.

In his keynote address, Nury Turkel thanked both His Grace Bishop Philip and His Eminence Archbishop Angaelos for hosting the event, and spoke of USCIRF’s ongoing work on the plight of people of all faiths and none suffering for exercising their right to FoRB, saying:

“During 2020, USCIRF was concerned about several governments whose actions met the statutory requirement of systematic, ongoing and egregious religious freedom violations.”

Mr Turkel went on to speak on numerous FoRB violations in a number of countries, noting various instances where rights are denied, including forced conversions, prevention of the freedom to worship, criminal cases against those falsely considered ‘extremist’ due to their religious beliefs, arrests, kidnapping, the denial of access to medical care, blasphemy charges, the dire situation of religious minority women and girls, and more.

Speaking on the ongoing plight of the Uyghur community in China, Mr Turkel said:

“Given the alarming scale of global assault on religious freedom, unilateral action is not enough. The United States must work alongside like-minded partners to protect freedom of religion or belief.”

Mr Turkel continued to suggest a number of actions that could be taken by state actors, saying:

“As we gather here on the margins of the G7, I would like to highlight some of our recommendations where there are opportunities for collective actions by G7 members…

Following the keynote address, Dr Ewelina U. Ochab, Deputy Director of Refcemi and Co-Founder of the Coalition for Genocide Response, moderated the panel discussion on State-sanctioned violations of FoRB - discussing the situation in North Korea, Myanmar, Nagorno-Karabakh, Cuba, China, the Tigray region of Ethiopia and more.

• Lord Alton of Liverpool, Cross-bench peer at the UK House of Lords and patron of the Coalition for Genocide Response

• Baroness Cox, Cross-bench peer at the UK House of Lords, Founder and CEO of HART,

Video messages were also received from Jim Shannon MP, chair of the APPG on FoRB and Sir Iain Duncan Smith MP, who urged continued action from the British government with regard to safeguarding the fundamental FoRB rights of people around the world.

Closing remarks were given by Archbishop Angaelos and Bishop Philip, who concluded the event with an inclusive prayer to cater for all those in attendance.

Derek Thomas, the Local MP for St Ives, was among those who attended the event in person, which had a limited in-person attendance capacity due to the ongoing pandemic, joined by webinar attendees comprising of members of the diplomatic corps, MPs, NGOs, advocates and members of the general public. 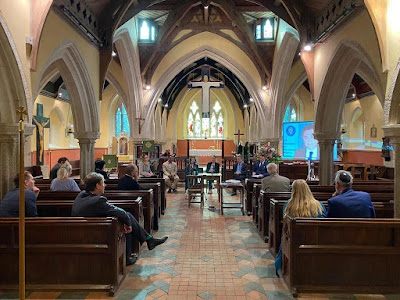 In 2019, Bishop Philip chaired the Foreign and Commonwealth Office’s independent review of the persecution of Christians across the globe. The Bishop of Truro’s Independent Review can be accessed here https://christianpersecutionreview.org.uk

Posted by The Coptic Orthodox Church Centre at 12:36