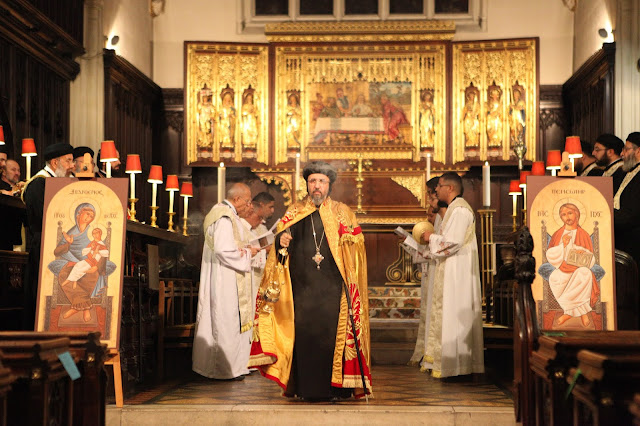 Messages were received from Her Majesty The Queen, His Royal Highness the Prince of Wales, the Most Reverend Archbishop Justin Welby, Archbishop of Canterbury, and the Right Honourable Boris Johnson MP, Prime Minister, as the annual Nayrouz (Coptic New Year) Service returned to St Margaret’s Church, Westminster Abbey on 9 November 2021. Addresses were delivered by The Lord Ahmad of Wimbledon, Prime Minister’s Special Representative on Preventing Sexual Violence in Conflict and Minster of State (Minister for South Asia, United Nations and the Commonwealth), and the Baroness Cox of Queensbury and Dr Ewelina Ochab, Deputy Director of Refcemi, The Coptic Orthodox Office for Advocacy and Public Policy.

Members of the House of Lords and House of Commons, the Diplomatic Corps, the Foreign, Commonwealth and Development Office, the Home Office, and humanitarian and advocacy organisations, as well as various ecumenical and inter-religious guests, joined members of the Coptic Orthodox community in the United Kingdom for the annual celebration, which was able to be held in-person, later than usual, after a year of challenges presented by the ongoing pandemic. The service commenced with a welcome by the Reverend Canon Anthony Ball, Canon of Westminster & Rector of St Margaret’s.

In his sermon, which focused on new beginnings, His Eminence Archbishop Angaelos, Coptic Orthodox Archbishop of London, said: 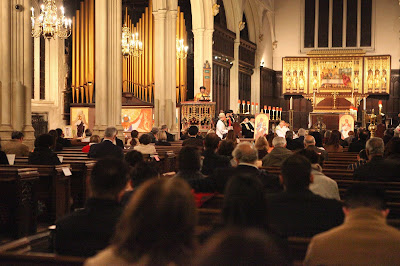 “Today, although a little later than usual, we celebrate New Beginnings. It is always a good opportunity to experience new beginnings, wherever or whenever they may occur. Some of us however fall into the romanticised view of what a good new beginning is. We speak of the joy of a fresh start, a fresh page, and we romanticise that; but new beginnings are, without a doubt, often difficult. There are so many around us who are starting afresh and yet doing so with considerable struggle.”

“We are asked to follow in the footsteps of our Creator, Who prepared everything for us, Who paved the way for us in His Incarnation so that we are helped as we journey, and Who reconciles us completely as we return. Today we must think more about others than ourselves. Let us not look at others from our own perspective, but theirs. When we see people journeying, let us walk in their shoes, for at least a small part of their journey, so that maybe then the complexity and challenge of those new beginnings may be better understood. We must exercise our generosity to those who deal with us at the personal level, to those within our communities, and to our world at large; recognising that when we are faithful stewards, more is given to us, so that we can be faithful over more. So, as we gather, we pray for new beginnings and new journeys, ours and those of others, and endeavour to do all we can for all those who may need our help along the way.”

Messages and Addresses followed the Service, beginning with a heartening message addressed to His Eminence Archbishop Angaelos from Her Majesty The Queen, read by Bishop David Hamid, in which Her Majesty wrote: 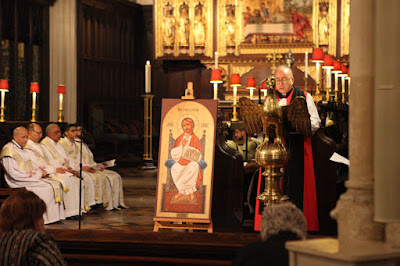 “Occasions such as this provide an opportunity to remember all those around the world who suffer hardship on account of their faith, especially in recent times. They remain in our thoughts and prayers.

At this time of reflection as you remember and honour the faithful witness and resilience of Coptic Christians throughout the ages, I wish all in the Coptic community a peaceful and blessed year ahead.”

The message of His Royal Highness the Prince of Wales, read by Bishop Jonathan Clark, spoke of the importance of gathering in prayer, especially for communities that face hardship on account of their religion or belief around the world: 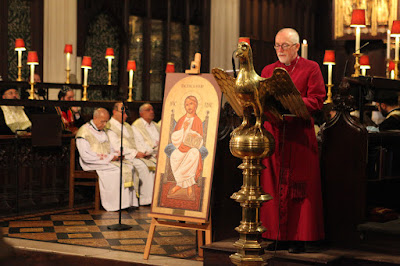 “Gathering together is an essential part of religious and community life. It helps us feel connected, not just at an individual level but, importantly, to something larger than ourselves. After such a challenging year for the global community, I am encouraged to know that the Feast of Nayrouz, the marking of the beginning of the Coptic new Year, will be a moment to see each other in person. In challenging times, the fact that the annual Nayrouz Service brings together so many people from different backgrounds and walks of life alongside the Coptic Orthodox community in the U.K. is a true symbol of solidarity and unity.”

“As communities around the world continue to face persecution and endure dreadful hardship for their faith, I join you today in prayer for all those who continue to suffer injustice and religious persecution.” 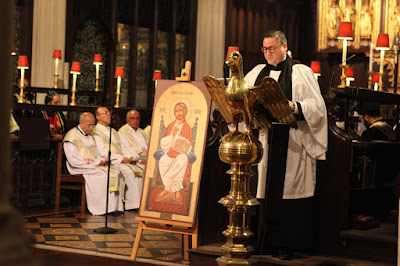 In a message from the Most Reverend Archbishop of Canterbury, read by Revd Dr Matthias Grebe, he focused on the importance of solidarity and collaboration, saying:

“Nayrouz or New Year, which takes place when normally the waters of the Nile rise, is a good time both to think of transitions and of the martyrs whose transition from death to life has so richly nourished the Church. Water can deal death and wash away dirt, and at the same time it gives new life, just as it does in baptism. The grace of this great sacrament is what we see displayed in the lives of the martyrs who inspire us to live out that same grace in our lives.”

“This is why our friendship is so important. It is not just a human friendship but a coming together in Christ. Not only does each growth in friendship take a step towards a more united world, but it increases Christ’s influence in the world.”

“May all of us, united in our faith in Jesus Christ, increase in the relationship of love He wants us to have with each other. Our prayers will be strengthened and our witness more effective.”

The Right Honourable Boris Johnson MP, Prime Minister reiterated the commitment of Her Majesty’s Government to respecting religious freedom and belief, in a Message read by Fiona Bruce MP, Prime Minister’s Special Envoy for Freedom of Religion or Belief: 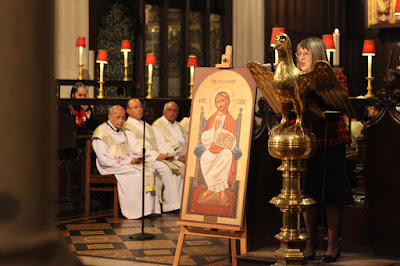 “It is heartening that you are able to gather in person again for this significant event after such a challenging time for us all. Standing together in solidarity to respect and advocate for one another is testament to the resilience and character of your community.”

"As you commemorate the lives of so many Christians and people of all faiths and none who have made the ultimate sacrifice for their faith or belief, it is important for us all to remember that faith and minority groups continue to suffer persecution around the world. Respect for people of faiths is of fundamental importance to Her Majesty’s Government.”

“I hope that these celebrations usher in a blessed and peaceful year for the Coptic Orthodox Church community both here in Britain and worldwide.” 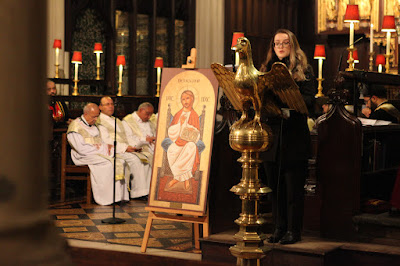 “All over the world, people – and whole communities – are suffering from persecution purely because of their religion or beliefs. This includes acts of violence and even attempts to annihilate whole communities. As we observe it, such acts are increasing globally. In the past five years alone, there have been several cases of atrocities which meet the legal definition of genocide. Yazidis, Christians and other religious minorities targeted by Daesh in Iraq Rohingya Muslims and other religious minorities targeted by the Burmese military in Myanmar. Uyghurs, Christians, Falun Gong practitioners, Tibetan Buddhists and others targeted in China. Christians targeted by Boko Haram and other militias in Nigeria —in all those cases, religious communities were targeted because of their religion or belief.”

“This is also the very reason for the establishment of Refcemi, the Coptic Orthodox Office for Advocacy and Public Policy founded in October 2019 by His Eminence Archbishop Angaelos. ‘Refcemi’ is the Coptic word for ‘advocate’. It speaks to the resilience of the Coptic Orthodox community which has lived through millennia of persecution, and in spite of these struggles,            has not retracted into a state of victimhood, but rather, has used this experience to stand and advocate for others.”

The Baroness Cox of Queensbury highlighted the persecution of a number of minority communities across the world, and said in her address: 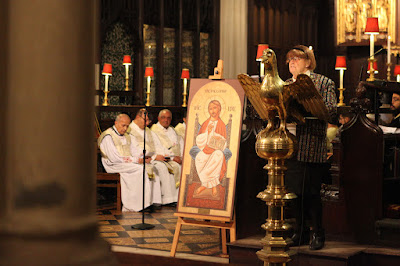 “My message is a plea for more churches in relative comfort zones in societies such as ours, to remember St. Paul’s letter to the church at Corinth:

‘When one part of the Body of Christ suffers, we all suffer.’

I hope and pray that we will be alongside in prayer with our brothers and sisters suffering persecution in so many countries today – and remember ‘Prayer without deeds is dead.’

Thank you for letting me share some of the pain, the passion and the privilege of being with our persecuted brothers and sisters. And may our prayers for them enable us to be more worthy of the price they are paying for our faith.”

Lord Ahmad of Wimbledon gave the concluding address, raising awareness of a number of religious freedom issues around the world, and reiterating the government’s commitment to working in the area of Freedom of Religion or Belief: 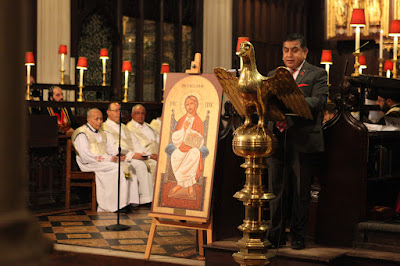 “Next summer, we will host an international Ministerial Conference on freedom of religion or belief.

The Foreign Secretary, the Prime Ministers’ Special Envoy Fiona Bruce, and myself, are all working hard to lay the foundations for a conference that energises the work of civil society, religious and non-religious communities, and Governments.”

“Your Eminence, Archbishop Angaelos, you have been a staunch ally in our shared mission to spread understanding, respect, and friendship between religious and non-religious communities.

I look forward to continuing our work together, as we promote and defend equality, inclusion and respect, at home and abroad; for everyone.”

Lord Ahmad concluded by expressing that the greatest test of anyone’s faith is the willingness and conviction to safeguard the faith of others. 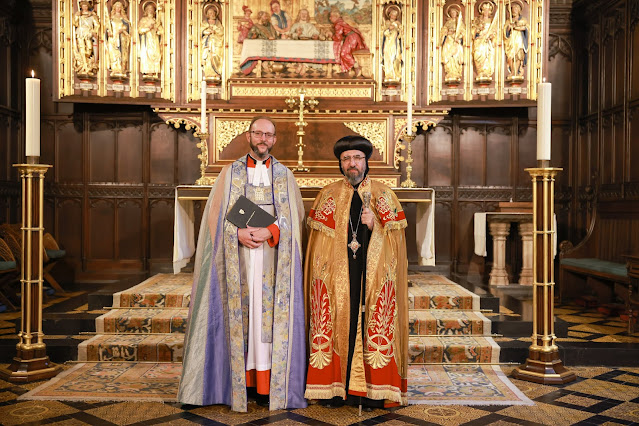 Posted by The Coptic Orthodox Church Centre at 17:30