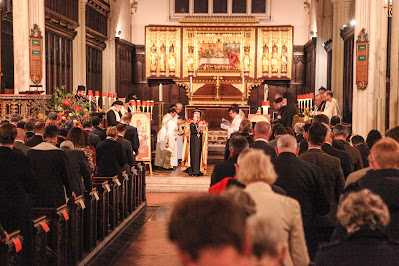 The Coptic Orthodox Church in the United Kingdom celebrated its 10th Official Annual Commemoration of Nayrouz (Coptic New Year) on 11 October 2022 in St Margaret’s Church, Westminster Abbey, with Messages from His Majesty King Charles III, the Most Reverend Archbishop Justin Welby, Archbishop of Canterbury, and His Royal Highness Prince El Hassan bin Talal, with addresses delivered by Fiona Bruce MP, Prime Minister’s Special Envoy for Freedom of Religion or Belief, His Excellency Ambassador Sherif Kamel, Ambassador of the Arab Republic of Egypt to the United Kingdom, and Dr Ewelina Ochab, Deputy Director of Refcemi, The Coptic Orthodox Office for Advocacy and Public Policy. The service was officiated by His Eminence Archbishop Angaelos OBE, Coptic Orthodox Archbishop of London and Papal Legate to the United Kingdom.

Members of the House of Lords and House of Commons, the Diplomatic Corps, the Foreign, Commonwealth and Development Office, the Home Office, and humanitarian and advocacy organisations, as well as various ecumenical and Inter-Religious guests, joined members of the Coptic Orthodox community in the United Kingdom for the annual celebration. 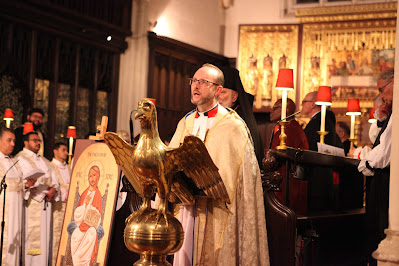 The service commenced with a welcome by The Right Reverend Anthony Ball, Rector of St Margaret’s Church, on behalf of the Dean and Chapter of Westminster, who said:

“As a member of the Christian community here in the United Kingdom, this is an important occasion each year where we celebrate the witness of the Coptic Orthodox Church both in the land of its birth and also in this Nation as the community, its clergy and Archbishop work so tirelessly for the common good and particularly the cause of Freedom of Religion and Belief. At a personal level, a bishop who serves in the Anglican Diocese of Egypt, it gives me very particular pleasure to be able to share this occasion with you all once again.” 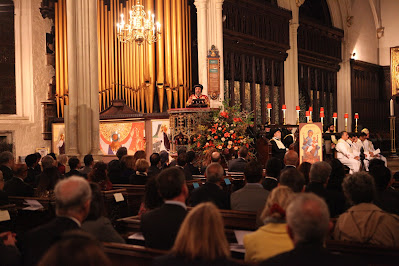 In his sermon, His Eminence Archbishop Angaelos made mention of an address by His Majesty King Charles III, saying:

“Only days before the funeral of Her late Majesty The Queen, I was privileged to be among faith leaders invited to an audience with His Majesty The King. During that meeting His Majesty said ‘As a member of the Church of England, my Christian beliefs have love at their very heart.  By my most profound convictions, therefore – as well as by my position as Sovereign – I hold myself bound to respect those who follow other spiritual paths, as well as those who seek to live their lives in accordance with secular ideals.’”

His Eminence expanded on this by saying:

“One may think that this is a peculiar statement to be made by a person of faith, but being a person of faith does not give the right to cast judgement on others. It gives the absolute right to believe what we want to believe regardless of and despite others, but it does not give the right to impose that faith on others. Our God Himself loves us so much that He leaves us with a choice, even if that painful choice is to reject Him. He gives us that autonomy.” 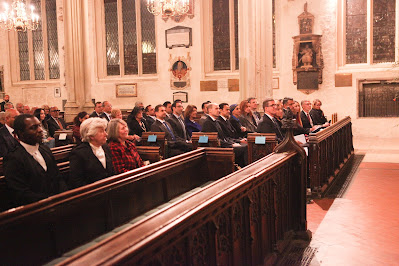 Providing another example of inclusive faith, he went on to say:

“In very much the same vein, we have heard President Sisi of Egypt, a devout Muslim, say that his faith was core to him and yet it was the choice of every person to have or not have a faith. This is the model of leadership around faith and belief that we must be following today.”

In his conclusion, the Archbishop said:

“We gather today and we pray for newness: personally, collectively, collaboratively, and as a Nation.

In her Christmas Message of 2013, Her late Majesty Queen Elizabeth II spoke of newness, saying: “For Christians, as for all people of faith, reflection, meditation and prayer help us to renew ourselves in God's love, as we strive daily to become better people”

“So today as we stand and pray here, we give thanks for all we have, and remember those who continue to suffer. We also pray for renewal in our own hearts, our conviction, our commitment, our words and our actions, that we too may be a reflection of light and hope, a model of graciousness and kindness, and a vehicle that takes people from hopelessness, darkness, and death, into hope, Light and Life.” 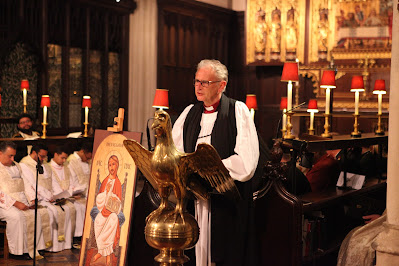 The following Message from His Majesty King Charles III, was read by The Right Reverend Christopher Cocksworth, Bishop of Coventry:

“As you come together to mark the 10th Anniversary of the Nayrouz Service in St. Margaret’s Church, Westminster Abbey, I very much wanted to express my hope that this New Year brings blessings and joy to your community here in the United Kingdom, as well as to His Holiness Pope Tawadros II and the Coptic Orthodox Church in Egypt and around the world.

I am well aware that you will have been accustomed on these occasions to receive warm messages from my beloved mother and how much your community valued these and will miss them. Throughout her life, The late Queen was truly committed to her Christian Faith, and recognised the great importance of respecting people of all faiths, and of none.

My thoughts are with so many in our world who face persecution and endure terrible hardship for their faith or belief, and I join you all today in prayer for those who continue to suffer injustice and persecution. I also join you in thanksgiving for the many freedoms we enjoy here in the United Kingdom.

I can only commend the resilience of the Coptic Orthodox Church and her faithful who have always carried their Cross with grace and courage. It is heartening to see that Coptic New Year celebrations continue to embrace and uplift people from all walks of life.

As you embark on this year of new beginnings, may you continue to bring people together in prayer and unity, and to promote peace and solidarity.” 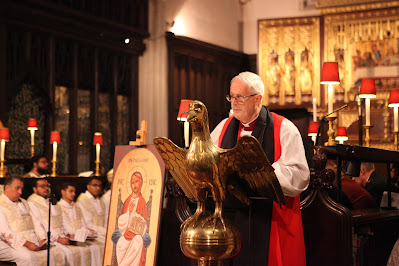 In a message from the Most Reverend Archbishop of Canterbury, read by The Right Reverend Christopher Chessun, Bishop of Southwark, His Grace wrote:

“In Christ all things are made anew. The followers of Christ face many difficulties, both in this country and in the Middle East. Here, even as we recover from the global pandemic, people are fearful of an autumn and winter of rising bills and hardship.”

“Europe finds itself once again experiencing war, with all the tragic loss and devastation it brings. But in the lands of the Middle East, Christians have endured suffering and persecution for many years. Our prayers for peace and justice rise to a Father whose Son suffered and died so that we might live and rise to life immortal.” 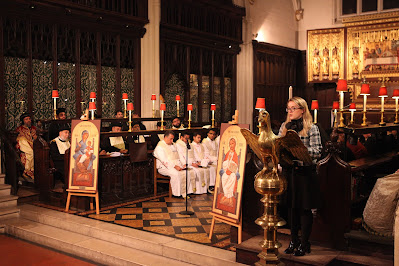 “The principle of compassion lies at the heart of all religious, ethical and spiritual traditions, calling us always to treat all others as we wish to be treated ourselves. Compassion impels us to work tirelessly to alleviate the suffering of our fellow creatures, to dethrone ourselves from the centre of our world and put another there, and to honour the inviolable sanctity of every single human being, treating everybody, without exception, with absolute justice, equity and respect.

Today’s celebration is also an occasion to emphasise the special place that the Coptic Christian Church represents in our Eastern and Arab heritage, which today is in dire need of deepening the common spiritual values brought about by the divine messages that came only to establish justice, love and peace among all human beings.” 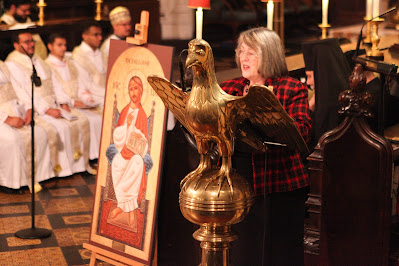 “The key aim of our alliance is to promote and protect Freedom of Religion or Belief for all across the world. A critical role since right across the world today people are losing their jobs, education, homes, livelihoods, families, freedom, access to justice, even life itself simply on account of what they believe. People are being discriminated against, marginalised, threatened, beaten, tortured, and killed, and too often by their own governments, the very governments with a duty to protect their citizens’ freedom of religion or belief. No one should face discrimination, hatred or violence simply because of what they believe, and yet in the 21st century millions do. Where Freedom of Religion or Belief is absent, not only do individuals suffer, but whole societies suffer. Countries cannot fully develop when they oppress members of minority groups. Communities are stronger when they include everyone. Freedom of belief is one of the foundations of a stable and secure society.” 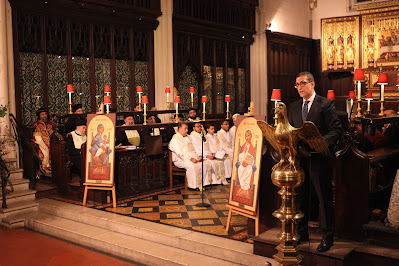 In his address, His Excellency Ambassador Sherif Kamel, Ambassador of the Arab Republic of Egypt to the United Kingdom, said:

“It is a special privilege to be with you all this evening, to join you and share with you the 10th official commemoration of the Coptic Orthodox Feast of Nayrouz, in Westminster. New beginnings are always associated with hope and aspiration but the new Coptic Year which we are celebrating this evening is also a symbol of great sacrifices and exceptional resilience. It is an occasion for all of us to reflect on the importance of Freedom of Religion or Belief and to appreciate what many of us have achieved towards upholding and protecting this basic foundation of humanity, and to renew our commitment to ensuring the universality of this right.”

“The fact that we are all gathered here tonight, with our different faiths, beliefs, and religions, celebrating the Coptic Orthodox New Year in Westminster Abbey, in the United Kingdom, is an example of the similarities that bond us and bring us together in all our diversified convictions. I pray that the New Coptic Year brings love and peace to all Coptic Christians in Egypt and all around the world and to all people, whatever their religion or belief may be. May Almighty God bless us all in the New Year.” 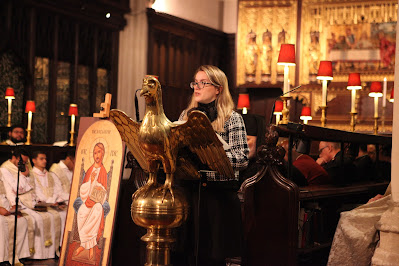 Dr Ewelina Ochab, Deputy Director of Refcemi, spoke of the unity required to combat violations of Freedom of Religion or Belief, and said:

“The very unity in purpose we have witnessed following the passing of our beloved Queen is what we need to turn the tide on religious persecution. We need this unity to make a difference to the lives of those persecuted, and this unity in purpose is urgently needed. Every conference I speak at, I give very concerning updates that, as I see it, persecution based on religion or belief is increasing.”

Speaking of the work of Refcemi, she continued:

“During the UK Ministerial on Freedom of Religion or Belief, Refcemi, the Coptic Orthodox Office for Advocacy and Public Policy, hosted, co-hosted and contributed to several sessions accommodating dialogue on crucial issues pertaining to Freedom of Religion or Belief. Together with His Grace Bishop Philip Mounstephen, Bishop of Truro, Archbishop Angaelos co-hosted a Prayer breakfast, bringing together representatives of many religions and beliefs to reflect on the work that needs to be done. This needs to happen more often, in more places, close and far from home, to facilitate a real change in the lives of those targeted.”

“We may not be able to recreate the unity in grief following the passing of our beloved Queen Elizabeth II but we need to unite in combatting the persecution of those targeted.  As Archbishop Angaelos says, ‘there is no monopoly in suffering,’ and so we must unite to alleviate the suffering of others irrespective of our religion or belief, our background, or age.”

For Coptic Orthodox Christians, ‘Nayrouz,’ or ‘New Year’, presents an ongoing paradox, through which new beginnings and life is celebrated, while remembering those who have paid, and countless others who continue to pay, the ultimate price for their Faith. The service in Westminster also gives rise to highlighting the plight of people around the world who suffer injustice and persecution on account of their faith or belief. 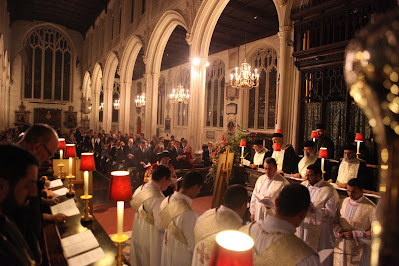 Posted by The Coptic Orthodox Church Centre at 11:16