Press Release
For immediate use
7 October 2013

After a ten-year postponement, the Anglican-Oriental Orthodox International Commission held its second meeting 3-7 October 2013 in England.

The Anglican-Oriental Orthodox International Commission met to discuss matters of Christology and the Holy Spirit, and to pray for Egypt, Syria and the wider Middle East during a special service on 5 October 2013. The meeting comes shortly after the visit of the Archbishop of Canterbury, the Most Reverend and Right Honourable Justin Welby to His Holiness Pope Tawadros II, 118th Pope of Alexandria and Patriarch of All Africa on the holy Apostolic See of Saint Mark in Egypt in June of this year.

His Grace Bishop Angaelos, General Bishop of The Coptic Orthodox Church in the United Kingdom, and acting Co-Secretary of the commission this year said:

“Having reconvened after a long postponement, we met with the aim of continuing our good relations and establishing greater unity between our Churches, while still tackling difficult and challenging issues. This has been an opportunity to re-establish a valuable platform for common understanding, leading to a greater witness of solidarity, not only for members of our own Churches but for the wider Christian Church and the whole world, especially our brethren in Egypt, Syria and throughout the Middle East for whom we prayed.”

“We rejoice that we have met together once more, here in England, and within this Diocese of Guildford. We have gathered to reflect on our common faith in Christ.”

“What is happening in Syria and the Middle East is the cost we have to pay for our faith. But the whole people of the Middle East, Christians and Muslims are suffering...”

The Archbishop of Canterbury, the Most Reverend and Right Honourable Justin Welby, who met with members of the consultation on Sunday 6 October 2013, said:

"I am delighted that Anglican and Orthodox Christians will worship together and remember in prayer the very difficult, indeed life-threatening circumstances in which some of the Churches are living.” 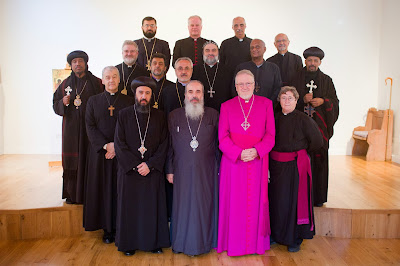 The Anglican-Oriental Orthodox International Commission has held its second meeting 3-7 October 2013 at St Columba's House, Woking, England. Our Churches rejoice at the resumption of this important dialogue after ten years.


We greatly appreciate the hospitality offered by the Anglican Communion, the Church of England, and the Diocese of Guildford.

During the course of its meeting the Commission shared in daily prayer from the various traditions represented, and considered and discussed the following papers:

The context in which we have met has been one of continuing concern for the countries in the Middle East in particular, as well as Kenya, Pakistan and Nigeria. Participants felt that Rev 1.9 spoke powerfully to us. ‘I, John, your brother, who share with you in Jesus, persecution and the kingdom and the patient endurance, was on the island called Patmos, because of the word of God and the testimony of Jesus.’


On Saturday 5 October we worshipped in the Coptic Orthodox Church of St Augustine, Gomshall, Surrey. Through this act of worship the members of the Commission, together with local church members, prayed and expressed solidarity with the peoples at the heart of suffering.

At the service, Bishop Angaelos said, 'We gather to remember our brethren in Egypt, Syria, and throughout the Middle East, where many continue to suffer persecution for their Faith. Some suffer even to the extent of losing their lives, yet their faithful witness in the Middle East is a blessing to the whole Church, and to the whole world.’

Bishop Geoffrey Rowell added, ‘We have reflected on our common faith in Christ, and how we speak of Him, and live in Him, by the life-giving work of God's Holy Spirit. We have done that in the deep awareness of the suffering of fellow Christians in Syria, in Egypt, and in many other places. The God whom we worship and adore is the One who comes down to the lowest part of our need.’

On Sunday 6 October members of the Commission were welcomed to the Eucharist at The Chapel Royal, Hampton Court, for its Feast of Dedication, and were joined by the Archbishop of Canterbury, the Most Revd Justin Welby. In greeting them Archbishop Justin said, ‘We meet with an urgency and importance to meeting, which is together to seek God’s powerful hand to deliver the people of Christ, who seek only to serve him and serve their people.’ We express our thanks for his presence with us and his encouragement for the work of this dialogue. We are also deeply grateful to his predecessor Dr Rowan Williams for his significant work in reviving this dialogue.

At the conclusion of the dialogue the Commission thanked God, Father, Son and Holy Spirit, for the unity that they experienced and shared.

Posted by The Coptic Orthodox Church Centre at 18:00