Press Release: His Royal Highness Prince El Hassan bin Talal of Jordan was received by His Grace Bishop Angaelos during a historic visit and interfaith gathering at The Coptic Orthodox Church Centre on 13 November 2013.


Press Release
For immediate use
14 November 2013 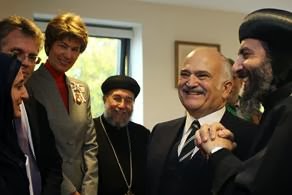 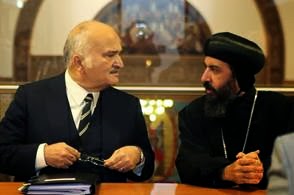 
This visit facilitated a gathering of guests from a variety of faith backgrounds who met in the Cathedral of St George to listen and respond to addresses by Bishop Angaelos and Prince Hassan on the subject of interreligious dialogue and cooperation at an interreligious level.


In welcoming Prince Hassan, Bishop Angaelos, a Scholar-Consultant on the Christian Muslim Forum of England and Moderator of the Churches' Inter Religious Network, said: 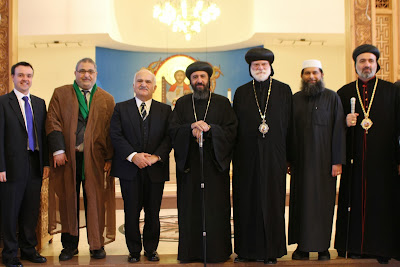 “Having recently celebrated Armistice Day, as the end of war and celebration of all those who gave their lives, the words ‘Lest we forget’ should also be applied to heroes of faith and inclusion. We are a reality in each other’s lives and reconciliation is our only way ahead, both in the Middle East and around the world.


I believe that faith and advocacy are inseparable; a faith that does not advocate is not a Godly faith. This is why we are here with the Cathedral of St George as our backdrop. The altar is the place of our greatest worship and what we are doing here is part of that worship, to be able to integrate our belief with our daily witness in our lives.”


His Royal Highness, who is President of the Foundation for Inter-religious and Intercultural Research and Dialogue, spoke in his address of the need for a strategy to stabilise the Middle East, further indicating the need for a process leading to free and responsible Arab citizenship. Following the address, His Royal Highness answered a variety of questions relating to the rapid decline in the number of Christians in the Middle East and the course of action required to address the increasing challenges facing various faith communities in the region.


During a presentation ceremony following the address, Bishop Angaelos presented His Royal Highness with the gift of a traditional Coptic Orthodox icon of Saint George, after which guests were able to further their conversations during an informal reception. 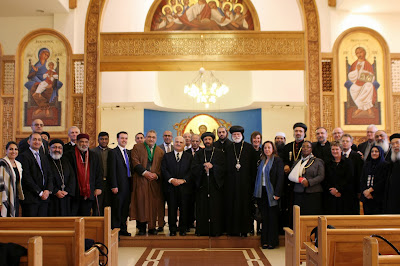 Resulting from the day’s events was a shared desire to engage more at an interreligious level with the furthered prospect of addressing the state of Christians in the Middle East and the challenges they face.


Among the guests were the Lord Lieutenant of Hertfordshire, Chief Inspector Richard Harbon, The Rt Hon Stephen McPartland MP, as well as representatives of Churches Together in England, Churches Together in Britain and Ireland, the Awareness Foundation, and the Muslim Christian Forum. Also in attendance were members of clergy and community of the Coptic Orthodox Church, and representatives from the broad spectrum of the Christian Church and the Muslim and Baha’i communities in the United Kingdom.
Posted by The Coptic Orthodox Church Centre at 18:10