PRESS RELEASE
For immediate use
29 October 2014 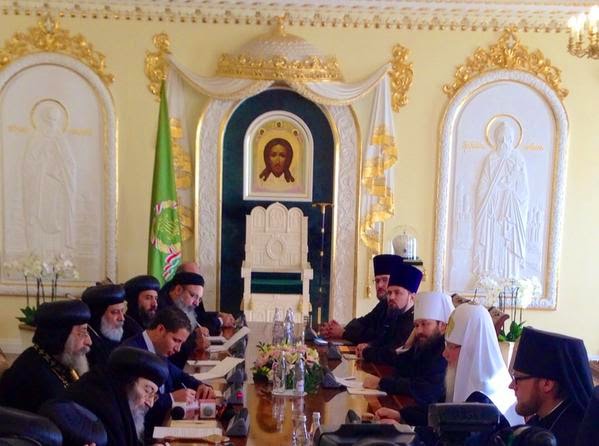 His Holiness Pope Tawadros II, 118th Pope of Alexandria and Patriarch of the See of Saint Mark, accompanied by a papal delegation, was received by His Holiness Patriarch Kirill of Moscow and All Russia at the Russian Patriarchate on 29 October 2014.

The visit, that included a formal meeting of delegations, followed by lunch, marks 26 years since the most recent visit of the last Pope of Alexandria, His Holiness, the late Pope Shenouda III.

During the meeting at the Patriarchate, His Holiness Pope Tawadros spoke of the great heritage of spirituality and monastic tradition within the Russian Orthodox Church and commented on its contemporary role and influence, suggesting that:

“Collaboration between our Churches will be of great value to our people, both in Egypt and Russia, and a symbol of proactive unity to the whole world.”

The two heads of Churches discussed various matters including contemporary social life, pastoral care, education and issues of morality, while also touching on the current events affecting both Egypt and Russia.

During the meeting, a joint bilateral committee was established to be headed by His Grace Bishop Serapion of Los Angeles and His Eminence Metropolitan Hilarion of Volokolamsk, Chairman of the Moscow Patriarchate Department for External Church Relations in Moscow. They will present a proposed plan to Pope Tawadros and Patriarch Kirill regarding conversation and collaboration on spiritual living, pastoral care, education and social ministry between the Churches.

Outside the Patriarchate in Moscow, Bishop Angaelos said:


“This has been a very positive meeting with a spirit that desires collaboration and a deepening of relationships. We have seen the heads of these two ancient and significant Churches side by side and speaking with almost identical words of hope, unity and collaboration. This is only the beginning of what I am sure will prove to be an even deeper, stronger, and more effective relationship between our Churches. We pray that this spirit be conveyed to our faithful and that it may be replicated in all of our ecumenical and inter-Church relationships.”

Earlier that day Pope Tawadros, accompanied by the Coptic Orthodox delegation and His Excellency Dr Mahmoud El-Badry, Ambassador of the Arab Republic of Egypt to the Russian Federation, was received by the Russian Minister for Foreign Affairs Mr Sergey Lavrov at the Ministry of Foreign Affairs in Moscow.

During the meeting with His Holiness, the Foreign Minister said: 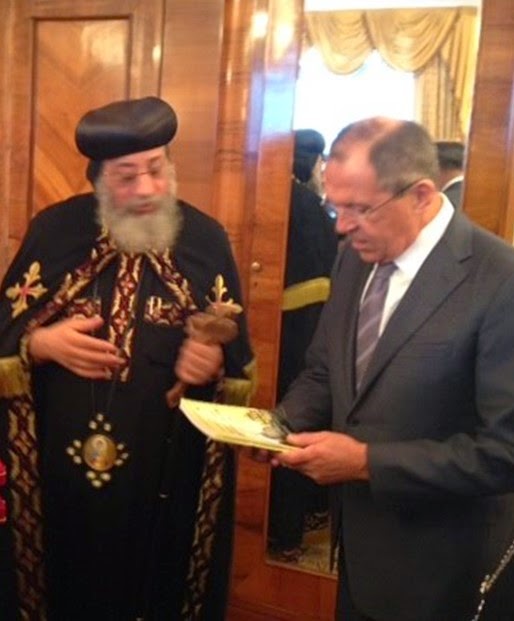 “This is a historic visit because, with respect to all history and previous visits, it is the first visit of the Coptic Orthodox Pope to what is now the Russian Federation, and we welcome you, while at the same time recognising the great role of the Coptic Orthodox Church in Egypt and the Middle East region.”

Throughout the duration of his stay Pope Tawadros will visit a number of significant Russian Orthodox churches and monasteries, while also undertaking various official and pastoral engagements with the Coptic faithful.

Posted by The Coptic Orthodox Church Centre at 13:12