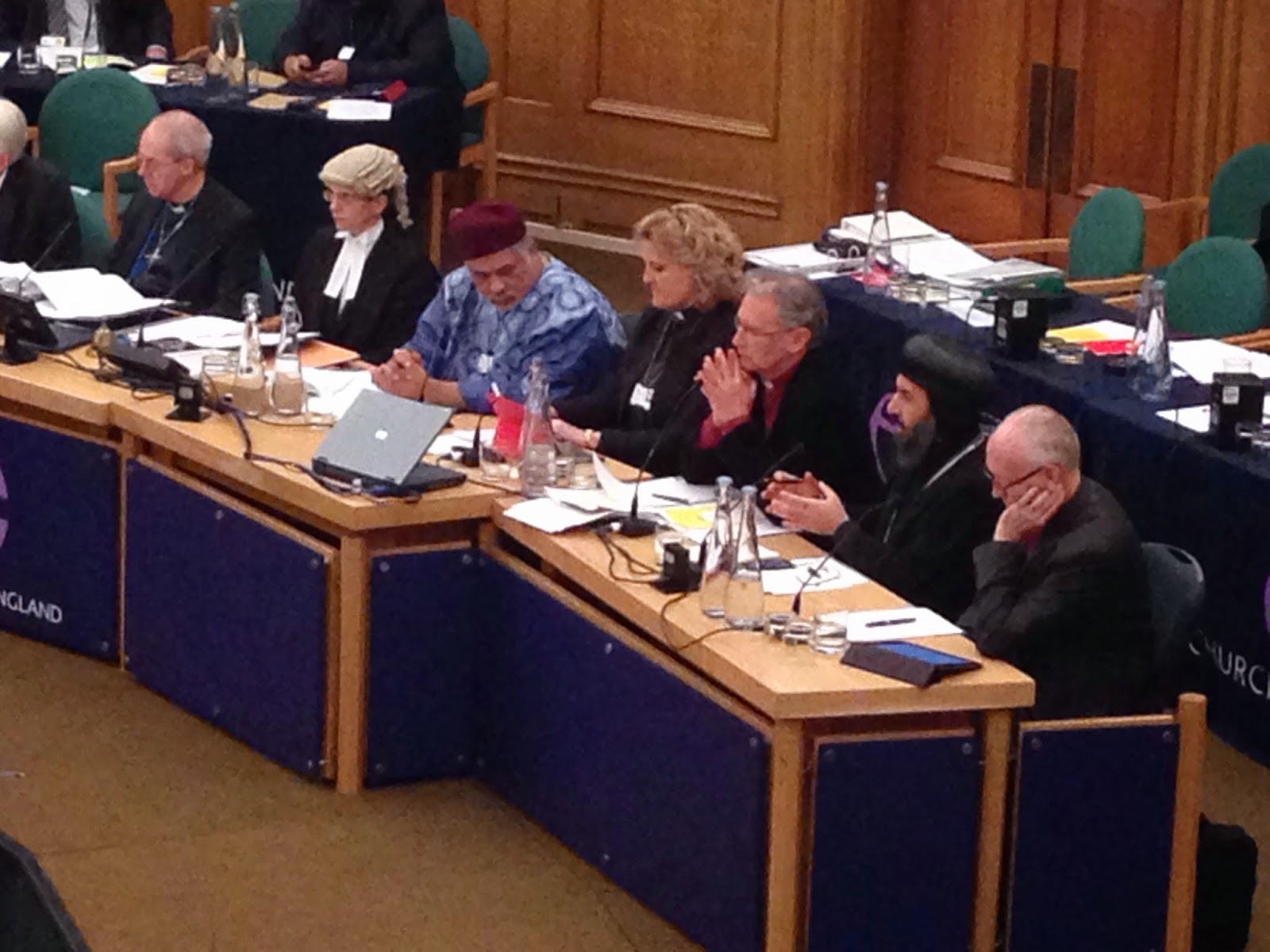 On 18 November 2014 His Grace Bishop Angaelos, General Bishop of the Coptic Orthodox Church in the United Kingdom participated in a panel discussion chaired by the Most Reverend Justin Welby, Archbishop of Canterbury, on violence against minorities in Iraq and Syria. The panel discussion took place during The Church of England General Synod, and the other panellists were: The Bishop of Leeds, The Rt Revd Nicholas Baines, The Revd Rachel Carnegie, Executive Director of the Anglican Alliance and Shaykh Fuad Nahdi, Executive Director of the Radical Middle Way.

As moderator of the panel, The Rt Revd Christopher Cocksworth, The Bishop of Coventry began proceedings by framing the discussion as one that should deal with listening to each other and ascertaining how the brokenness in the Middle East, in particular Iraq and Syria, has come about and what appropriate action can be taken in response.

During the discussion His Grace Bishop Angaelos spoke of the need to keep the plight of those suffering in the Middle East in the forefront of prayers and advocacy efforts despite a constant shift in media focus and narrative. He made mention of the urgent need for humanitarian aid for those in Iraq and Syria as well as the safeguarding of their religious freedom, saying:

“The Universal Declaration of Human Rights and other such agreements merely safeguard God-given liberties. Since the basis of our freedom is found in Scripture we have the credibility and responsibility as the Church to advocate for all regardless of religious affiliation.”

Bishop Angaelos spoke of those in Iraq and Syria who desire to continue living in their homelands despite the persecution faced, as well as others who are asking to leave and are seeking asylum in Great Britain. He went on to say that in responding to the situation decision makers must not be prescriptive but directly responsive to these people and their needs. Going on to clarify that if they feel that they have a viable presence then they must be supported there, but if they feel unable to continue due to risks upon them, their families and communities, then we must provide the means for their relocation by granting them asylum where we can. His Grace also expressed his thanks to Her Majesty’s government and humanitarian organisations for providing support and aid to those in need.

In response to the notion presented that there is no compulsion in religion and in answer to the question “Is there a future for these communities to continue to live together?” Bishop Angaelos expressed that it is unquestionable that there is evidence of compulsion and even retribution for some of those who wish to live, practice and choose their faith freely. He also stressed the need for prominent leaders within Muslim communities to condemn these violations and encourage a greater openness and acceptance. Bishop Angaelos concluded by saying that while there is a radical and vocal fringe, when the Christian voice is added to an accepting and embracing Muslim voice this is a sizeable, powerful and effective majority.

Lastly His Grace spoke of the essential need for a message of solidarity and unity from the Church in the United Kingdom, referring to the Body of Christ as a means of support and strength for all those suffering persecution in Iraq, Syria and elsewhere. His Grace emphasized the need to cease using the artificial discrepancy of referring to the ‘Eastern’ and ‘Western’ Church, going on to say that the Church must, now more than ever, speak and respond to the suffering of those in the Middle East in a collective and unified manner.
Shaykh Fuad Nahdi spoke of the persecution of Christians as heinous and unacceptable for any human being, speaking of the importance of coexistence saying:

“We must share the example about coexistence and show compassion, but above all things we must fight ignorance.”

The Rt Revd Nicholas Baines, who has previously written a letter to The Rt Honourable Prime Minister David Cameron in response to the situation in Iraq and Syria, spoke of the importance of not only being reactive but having a long-term view in responding to the crisis. In answering a question regarding the importance of media reporting, he said:

“Religious literacy is needed in the media. We need also to praise them when they report well. We must remember that journalists are also losing their lives and we need to pray and support them.”

The Revd Rachel Carnegie spoke about horrifying reports of individuals who are being persecuted for their faith in Syria and Iraq, while also speaking about the hopeful initiatives and work of those who are providing humanitarian assistance in the region and urging the Church to continue in prayer for those suffering, saying:

“We must continue to pray as prayer becomes the foundation of our response, for protection, provision, and perseverance.’


The session was closed with prayer by The Archbishop of York, Dr John Sentamu.
Posted by The Coptic Orthodox Church Centre at 17:33