Press Release: His Grace Bishop Angaelos represents His Holiness Pope Tawadros II at an international conference in Italy regarding the future of Christians in the Middle East.

Press Release
For immediate use
30 April 2015

His Grace Bishop Angaelos represents His Holiness Pope Tawadros II at an international conference in Italy regarding the future of Christians in the Middle East. 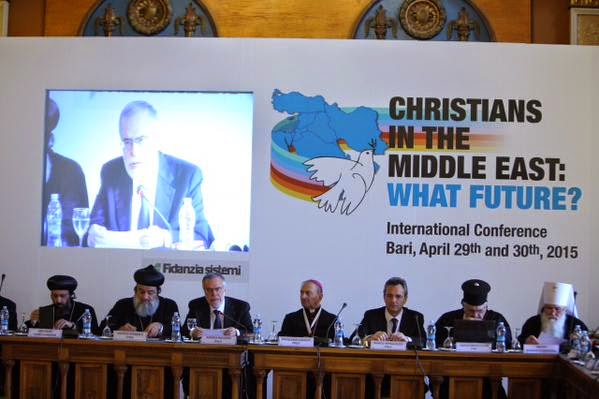 30 April 2015
His Grace Bishop Angaelos, General Bishop of the Coptic Orthodox Church in the United Kingdom,  took part in an international conference entitled ‘Christians in the Middle East: What Future?’ officially representing His Holiness Pope Tawadros II, Pope of Alexandria and Patriarch of the See of St Mark.
The conference, which was held on 29-30 April 2015 in Bari Italy, was attended by patriarchs and heads of the Catholic, Oriental Orthodox and Eastern Orthodox Churches of the Middle East, along with international political and governmental representatives, journalists, academics and lay members of communities. 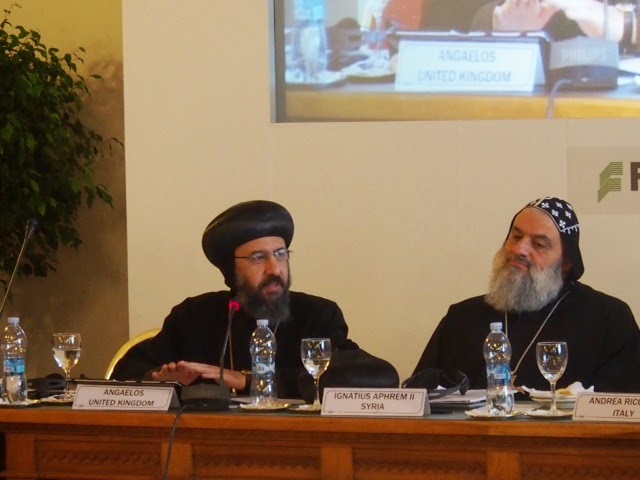 Speaking of the need for collaborative efforts in responding to the extreme challenges that face Christians in the Middle East, Bishop Angaelos said:
“It is time for greater collaboration between our Churches, governments, organisations, and initiatives like this, which will lead to greater results for all. If we do not take ownership in responding to this situation and the needs of those suffering in the Middle East now, opportunists will take our place and use this tragedy and its victims for their own agenda. A lack of coordination will lead to a fragmentation of what should be a very powerful voice of advocacy, as well as duplication and the wastage of resourses that are already limited in light of the immense need.”
On the final day of the conference Bishop Angaelos spoke about safeguarding the rights and freedoms of Christians in the Middle East, and the importance of classifying them as indigenous people, saying:
“This must be transformed from an issue of minorities to one of indigenous people who have had their roots in these lands for not only decades or centuries but millennia. They are an intrinsic part of, and a stabilising force in, the region, and losing them would be a loss to the whole world as they are, through their continuous presence, part of the history, institution and constitution of the Middle East.”
Speaking of the continued need for voicing the issue and for advocacy efforts, Bishop Angaelos said:
“There has been such an immense bravery and witness from so many in the region, including the Ethiopian and Coptic martyrs who recently paid the ultimate price, the two Syrian archbishops who remain missing, and so many more in Iraq and Syria. As Christian leaders we must continue to speak with a voice that is nuanced, no longer referring to Christians of the East and West, but speaking as the one Body of Christ that suffers and witnesses equally and is unified in proclaiming the Gospel.”

As part of the programme, attendees gathered for a service of prayer dedicated to Christians of the Middle East in the Basilica of San Nicola on Wednesday evening.
The conference was hosted collaboratively by the Community of Sant’Egidio and the Catholic Archdiocese of Bari-Bitonto in response to an open plea by His Holiness Pope Francis, Bishop of Rome and Supreme Pontiff of the Roman Catholic Church, for 'an appropriate response from the international community to the challenges facing Christians in the Middle East.' 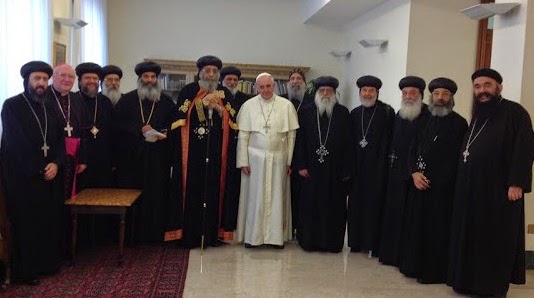 Pope Tawadros visited Pope Francis at the Vatican in May 2013, marking 40 years since the late Pope Shenouda III and the late Pope Paul VI signed the historic Christological agreement between their respective Churches at the Vatican in 1973. Bishop Angaelos, who was also part of the delegation accompanying Pope Tawadros, said 'during this visit, Their Holiness spoke of the shared heritage of martyrdom in their Churches, which now seems almost prophetic in light of this and similar meetings that attempt to respond to atrocities that continue to be faced by members of their Churches today in the Middle East.'

Visit www.Santegidio.org for more information about the conference.
Posted by The Coptic Orthodox Church Centre at 17:38