HG Bishop Angaelos speaks on a National Press Club panel in Washington DC on ‘Declaring Genocide: Equality and Dignity for Humanity as a Whole’

HG Bishop Angaelos speaks on a National Press Club panel in Washington DC on ‘Declaring Genocide: Equality and Dignity for Humanity as a Whole’ on 10 March 2016

His Grace Bishop Angaelos, General Bishop of the Coptic Orthodox Church in the United Kingdom, spoke at a Press Conference regarding a potential U.S. Genocide declaration in response to actions of the Caliphate against the Yazidi and Christian communities in the Middle East. The event was held at The National Press Club in Washington DC on 10 March 2016, and co-sponsored by The Knights of Columbus and Indefense of Christians (IDC). 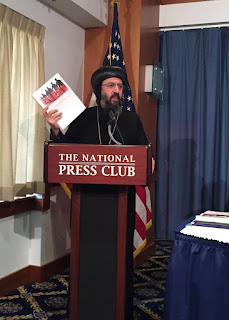 In his address, entitled ‘Declaring Genocide: Equality and Dignity for Humanity as a Whole’ Bishop Angaelos said:

“We are here to speak about an issue of human rights and human dignity and the sanctity of life, regardless of faith or ethnicity. If an act of Genocide is decreed, it must be based indiscriminately on the facts alone.”

While holding a copy of the recent report on ‘Genocide against Christians in the MiddleEast’ released by The Knights of Columbus for the State Department, he continued:

“If we look at Article 2 of the Convention on the Prevention and Punishment of the Crime of Genocide (1948) we find that these acts against Christians in the Middle East fall very much in line with the requirements laid out by the United Nations.
I draw your attention now to the picture on the front of the report which depicts 21 of our own Coptic Christians who were brutally murdered in Libya last year. They were intentionally targeted and murdered purely for their Christian Faith.”

Stressing the importance of including Christians in the classification of Genocide, Bishop Angaelos said:

“If Christians are excluded from the classification of Genocide, my concern, fear and expectation is that we will be responsible for a greater and more ruthless campaign of persecution against them, not only in Iraq and Syria but throughout the region.
People on the ground, regardless of rhetoric, stipulation and convention, will perceive that the international community has supported one group over another, and Christians will become a greater soft target. How can we not declare Genocide if Christians are suffering the same fate, at the same time, under the same conditions, at the hands of the same perpetrators?”

Going on to speak about the violation of basic God-given rights, he said:

“What is happening in the Middle East and Syria is criminal and is an indictment of our humanity if left unaddressed. Whether speaking of Yazidis, Christians or other communities, the atrocities they face are deplorable and warrant not only our concern but our intentional action.

These are atrocities not only against international convention, but against a God-given right for people to live free, safe and dignified.”

Warning the international community regarding neglect of those suffering in the Middle East, Bishop Angaelos said:

“Inaction is inexcusable and will lead to further persecution, not only of Christians but of others. It has also led to an unprecedented displacement of people and the resulting refugee crisis that we are witnessing. Having been to Erbil and to the Z’atari camp in Jordan last week, and the transit camps in Europe, I have seen the direct effects of that persecution.”

“The path to Genocide is not laid overnight. It is a result of a gradual accumulation over decades, involving ongoing persecution and marginalisation of vulnerable communities. Having gone unchecked on our watch, this has led to our desensitisation and the acceptance of this discriminatory dynamic as the status quo.

In declaring Genocide we are looking to address and flag up the unbearable suffering of communities and subsequently work for the safeguarding of God-given rights enshrined in Universal and international law. We are not looking just to carry out a statistical process, but to safeguard safety not protection, prosperity not charity, and to ensure dignity and not mere survival.” 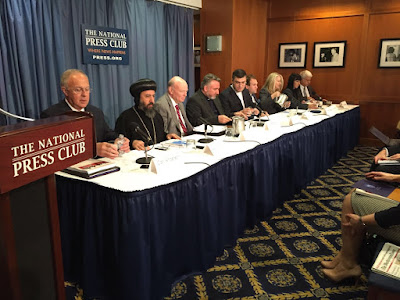 Posted by The Coptic Orthodox Church Centre at 18:40