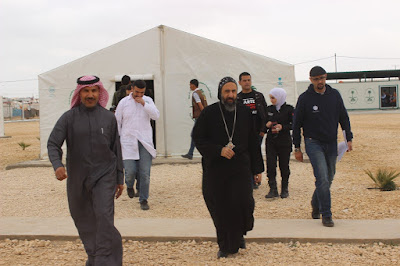 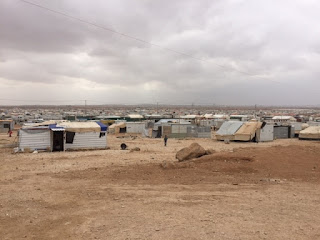 In March 2016, His Grace Bishop Angaelos, General Bishop of the Coptic Orthodox Church in the United Kingdom visited the Za’atari Refugee Camp, the largest in Jordan and second-largest in the world, and met with international aid organisations and agencies to discuss the means by which they are serving those who have fled the crisis in Syria.

Speaking about his visit to the camp, Bishop Angaelos said:

“Despite the tragic nature of the current refugee crisis, it was heartening to see children being able to attend educational classes within the camps, and equally encouraging to see women taught various life skills, including computing, embroidery and sowing.

Having met with the directors of UNICEF, UNHCR, World Food Programme, the Jordan Hashemite Charity Organisation and Caritas,  it is clear that immensely good and faithful work is being carried out daily to provide for the vulnerable victims of this current crisis.”

During his visit, which was arranged by The Royal Institute for Interfaith Studies (RIIFS), His Grace delivered a lecture at the Orthodox Club in Amman at the invitation and in the presence of His Royal Highness Prince El Hassan bin Talal of Jordan, Patron of RIIFS. The lecture, entitled ‘A time for opportunity and hope in the Middle East’ was also attended by Dr. Hayel Dawood, Minister of Awqaf and Islamic Affairs, numerous Church and Muslim leaders, diplomats, academics, legal and Middle East experts, and members of the Club. During the lecture Bishop Angaelos spoke of the need and opportunity for a new narrative concerning the Middle East, saying:

“This is an opportunity for us as civic and religious leaders to change the narrative and the expectation that the world has of the Middle East. Many now have no expectation of the region except that the situation will go from bad to worse, and that initiatives will be met with greater failure. We know however, because of our Faith, that there is always hope in humanity, and we must build upon that hope.”

Commenting on the role of religion in the Middle East, he went on to say:

“Religion is seen by many to be the cause of the problem, but we must challenge the view that religion is irrelevant and a cause of conflict, and show that it is actually an essential part of the solution. We must continue to address internal radical interpretations of religion, and create a nuanced narrative and conversation to allow for freedom of choice, prosperity and dignity for all. We must no longer aim to merely ‘tolerate’ those who are different, but value and celebrate them in that difference.”

Speaking to the impact religious leaders can have on the Middle East region, he said:

“We need to be hope in an increasing hopelessness, and light in an increasing darkness. It is not enough for us to only lead in good times. Good leadership is especially required at the most difficult of times. Not only is it required, it is essential, because it is at those difficult times that people look to a beacon, and they look to someone to follow.” 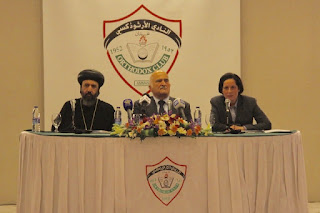 Paying tribute to Prince Hassan and the work of the institute, Bishop Angaelos said:

“What is required of us as leaders, and what is seen here through this Institute and through this initiative, through His Royal Highness and through this Kingdom, is something that is new and welcomed. These efforts should not only be spoken about, they need to be celebrated.”

Bishop Angaelos concluded with a call for continued collaboration, saying:

“We are told in our Scriptures that we are the ‘light of the world’ and a ‘city set on a hill’ (Matthew 5:14) that cannot be hidden. Our world today needs that light of hope that is able to conquer all darkness…The time has come that we should not only react to messages of hopelessness, but that we become proactive and take the narrative into our hands, demonstrating a new and alternative model to the world.”

Following the lecture, in his response, Prince Hassan said:

“…I thank God that we have this opportunity of interacting with love and respect, and not mere tolerance…the message of hope is clear.” 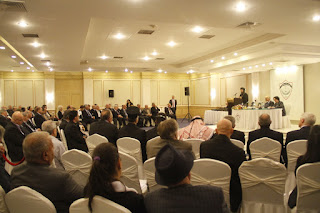 Speaking of a recent visit to a hospital under the care of Medecins Sans Frontieres in Jordan, His Royal Highness said:

“Yet again I saw the grotesquely disfigured, the amputated; a child who saw his father and uncles killed before him, deprived of the capacity of speech. The reconstructive process is not only of the physical framework of the human but of the attitude. They tell me children are not always drawing monsters, and bombs, but they are beginning to draw the sky and the sea and green pastures. So I would like to pay tribute to the nameless people of many nationalities, including many Jordanians, who have been dealing with the consequences of man’s inhumanity to man.”

“How many families, communities, nations, and regions have to be torn apart before we finally wake up to the importance of change?”​

Later during his visit, Bishop Angaelos met with the Director and Secretary General of the Hashemite Charity Organisation, the Secretary General of the Arab Thought Forum, and the Director of Caritas Jordan, among others, during a lunch hosted by the Hashemite Charity Organisation. He also met with Munther Namat, Director of the Bible Society in Jordan, and visited the sacred sights of the Jordan River and various churches in the Jordan Valley region, as well as the Coptic Orthodox Church and community in Amman.

Posted by The Coptic Orthodox Church Centre at 14:33