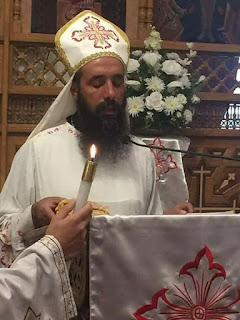 Another day in Egypt with another Coptic Christian murdered; this time a priest from Beni Suef, Upper Egypt, who was in Cairo collecting humanitarian aid for vulnerable members of his parish. Fr Samaan was paying a pastoral visit to a family in Cairo and returned to the church where he was earlier to collect his mobile phone. On the way, he was attacked by a knife-wielding assailant who chased him, stabbed him repeatedly, and then brutally killed him.

This incident makes us once again ask so many questions. Why should a priest not be able to walk safely down a street, especially a suburban street in Cairo? Why should he be chased by a man brandishing a deadly weapon and have no one run to his aid; in actual fact, everyone was running away. Why, when he lay drenched in his own blood did the ambulance service not arrive for over an hour, and then not treat him? Why, when the police finally arrived, and he lay dead, was a crime scene not secured and forensic evidence not collected to enable a robust and serious investigation? Why is his assailant immediately deemed mentally incapable without professional diagnosis, and why, if he is incapable, and a known violent criminal, is he left in the community with weapons within his reach?

Just this week I have been with a Coptic delegation from Cairo seeking grants to serve not only the Coptic community but the wider Egyptian community. Grants that would cover health, education and poverty eradication. Where was this wider Egyptian community however when Father Samaan ran terrified through a street being chased by a violent criminal, and where was it when he lay dying and alone? Where was it when the assailant attacked him repeatedly, and where will it be while his family and congregation grieve the loss of their father, husband, brother, pastor and friend? These are questions that need to be addressed at every level of Egyptian community and leadership.

Crime cannot be totally eradicated, but at least it needs to be properly investigated, prosecuted, and shown to be a violation against the whole state and not just its immediate victim.

The immense pain of this incident and all that have preceded it, including: child kidnapping, forced conversion, individual targetting, bus attacks and church bombings against the Coptic Orthodox community in Egypt, leads us to hold more strongly onto the words of our Lord God in Exodus 3:7: “I have surely seen the oppression of My people who are in Egypt, and have heard their cry…for I know their sorrows.” Coptic Christians who have endured injustice, persecution, and loss of life for centuries without retaliation, repeatedly forgiving unconditionally, deserve to live with respect and dignity in their indigenous homeland.

While recognising that anger may often open a path to hatred or resentment, there are times at which it is a natural expression of a human emotion, and reaction to a sense of deep injustice. I am sure that I am not alone in my anger, but that it is shared by every law-abiding person of any belief and indeed of none, who has witnessed this vicious and inhumane attack. In the midst of this anger and this sadness however I continue to pray. I pray repose for Father Samaan, I pray for his family, I pray for his community. I pray for the wider Egyptian Christian community that feels more and more vulnerable and targeted daily against a backdrop of negligence and injustice. I pray for the wider Egyptian society, that becomes more and more discredited and compromised as these incidents continue to happen.

This anger is not void of forgiveness, but cries out for accountability and justice.

For more information please e-mail the Director of Communications via Media@CopticCentre.com
Posted by The Coptic Orthodox Church Centre at 23:54