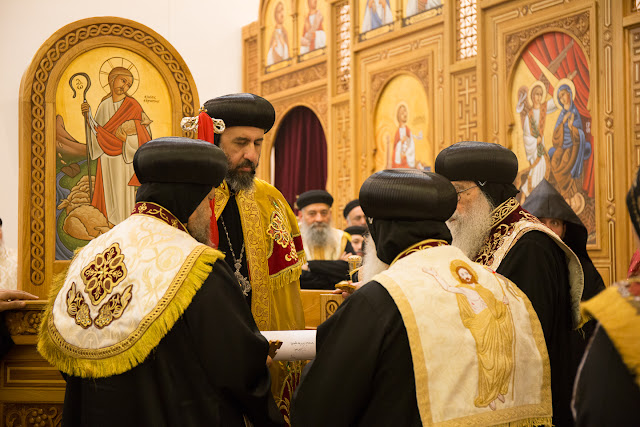 Watch the service via www.BishopAngaelos.org 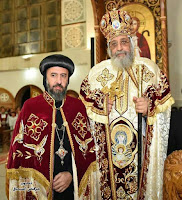 On 18 November 2017, His Grace Bishop Angaelos, who has served as General Bishop of the Coptic Orthodox Church in the United Kingdom since 1999, was enthroned as the first Bishop of the new Coptic Orthodox Diocese of London during a historic service in the Coptic Cathedral of Saint George, Hertfordshire. The Enthronement service came a week after HH Pope Tawadros II, Pope of Alexandria and Patriarch of the See of Saint Mark, and the Holy Synod of the Coptic Orthodox Church, Proclaimed Bishop Angaelos as the first Diocesan Bishop of London in a service in St Bishoy Monastery Wadi El-Natrun, Egypt. 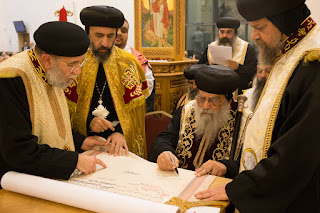 The vespers service included traditional Coptic prayers, mostly in English, followed by the enthronement of His Grace at the hands of a delegation of visiting Coptic Metropolitans and Bishops. The Instrument of Enthronement, the document outlining the bishop’s appointment and responsibilities, was formally signed by the members of the delegation. 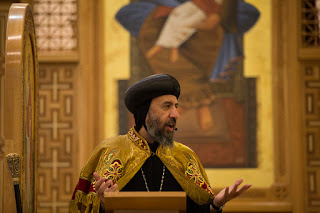 “This is not a day about me, but about this Diocese, it is a birth of a new diocese, the putting together of a new family.

“Today we start a journey together, because a Diocese is a combination of individuals and parishes who bring to this new family their own strengths, while being able to also compensate for one other’s weaknesses. As a diocese I would want us to follow closely in the footsteps of our Lord and in the words of St Cyril of Jerusalem, who says: “Everywhere the Saviour becomes all things to all. To the hungry bread; to the thirsty, water, to the dead, Resurrection, to the sick a physician, to sinners: Redemption.” I do hope that we can work towards trying to accommodate for all.”

“What sets the Church apart from other organisations and institutions is that it is centred on Christ and that we can go to Him in our times of greatest need. It is also the fellowship of the Eucharist, the Body of Christ of which we are all members individually, but Christ remains our Head.” 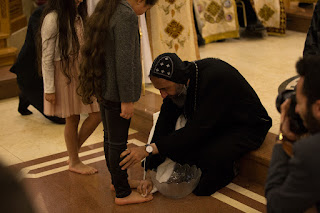 “Today is a start, and I pray that God continues to support us to pray, work, and journey together. At this time I wish to remember what our Lord instructed His disciples to do in John 13:14, saying that they must begin their ministry by washing one another’s feet, and that it was in that spirit that the ministry of the Gospel is carried out. So I pray and I hope that this ministry is going to be about the washing of feet, mine of yours, and yours of one another’s.”

Towards the end of his address, Bishop Angaelos, removed his cope and proceeded to wash the feet of a number of children in the congregation, signifying his intent to begin his new ministry as a servant with the desire to follow in the footsteps of our Lord Jesus Christ. 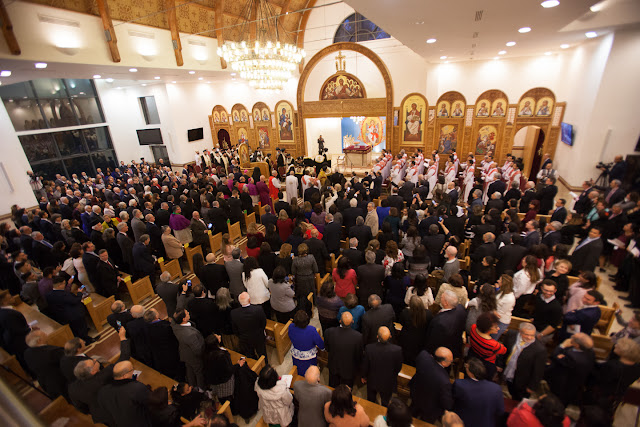 Photographs will be made available via www.Flickr.com/CopticMedia

The Coptic Orthodox Church in the United Kingdom, dates back to 10 August 1954 when it commenced its pastoral and liturgical ministry in London. In February 1969, a historic Liturgy was celebrated in London by the then Bishop Shenouda, the late Pope Shenouda III, who encouraged the faithful to hold regular services, which subsequently led to the hiring of St Andrew’s church in Holborn. Copts would gather from across the United Kingdom to pray there until 1978 when, returning to London as Pope Shenouda III, His Holiness consecrated St Mark church in Kensington as the first Coptic Orthodox parish in Europe.
Since then, the Coptic Orthodox Church in the United Kingdom and Republic of Ireland has become an active member of its respective local, regional and national communities, serving in a variety of ways across the four nations, equipping its faithful to be positively contributing and active members in their local settings. At the core of its pastoral care is a focus on Christian education at every level and an active youth ministry. The Coptic Orthodox Church also serves on a wider level through engaging in a variety of benevolent and advocacy related work.
The Coptic Orthodox Church in the United Kingdom and the Republic of Ireland now has approximately 20,000 faithful across 32 parishes, with the number of these parishes constantly increasing. These have thus far been served by three dioceses: the diocese of Birmingham, the Midlands and its affiliated regions, served by HG Bishop Missael, the Diocese of Scotland, Ireland and North East England, served by HG Bishop Antony, and the Papal Diocese which, prior to His Grace's appointment as Bishop of London, covered London, the South of England and South Wales, in which HG Bishop Angaelos has served as His Holiness the Pope’s delegate since 1999.
His Holiness Pope Tawadros II and the Holy Synod of the Coptic Orthodox Church have now established the Coptic Orthodox Diocese of London.

Posted by The Coptic Orthodox Church Centre at 15:50