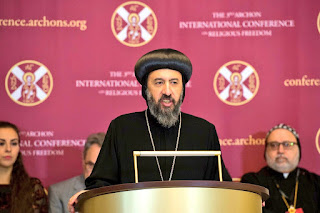 7 December 2017
A three-day conference was held from 4-6 December 2017 in Washington, DC, on the “Persecution of Christians in the Holy Lands and the Middle East: Consequences and Solutions.” The 3rd Archon International Conference on Religious Freedom, sponsored by the Order of Saint Andrew the Apostle, Archons of the Ecumenical Patriarchate, was attended by government officials, human rights activists, academics, and religious leaders, among whom was Archbishop Angaelos of London. Speakers included, among others, an array of Church leaders and representatives, senators, congressmen, advocates, professors, and media personnel. Sessions included the “History of the Christian Church” focusing on the disappearance of Christians from the birthplace of Christianity, “Persecution of Christians and Possible Solutions,” “Freedoms of Religion and the Press,” and “Sacred Sites and Property Rights.”

In his address, Archbishop Angaelos of London spoke about the need to recognise basic human rights that should be afforded to all, saying: 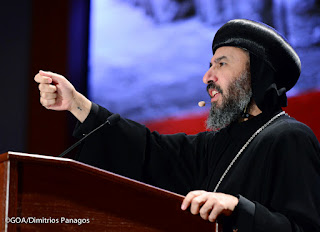 Speaking about the extent of religious freedom violations worldwide, the Archbishop went on to stress the need for collaboration:

“This is an international epidemic and exceeds the ability of any single person, organisation, faith, and even nation state to fix. This needs a collaborative response that brings together policy makers, religious leaders, and civic society, bringing all of our abilities together, all that God gives us, to represent them.”


Addressing members of the Christian Faith directly, he continued:

“We hear the stories of the saints in our Churches, in our Liturgies every day, but persecution is still happening. It happened on our screens. We saw it before us.”

“Sisters and brothers, this should no longer happen on our watch, because as they are cut, we bleed. As members of the same Body, we need to stop using the language of the ‘Church of the East’ and ‘Church of the West’. There is only one Body for us. It rejoices as one, it mourns as one, it also struggles as one.”


Highlighting the need to safeguard God-given rights and freedoms he said:

“Under article 18 of the Universal Charter of Human Rights, we are told that everyone shall have a right to freedom of thought, conscience, and religion. Inalienable rights; rights that no one should take away. God gives us the right to accept or, indeed, to reject Him, so who are we to impose Him on others based on our own ideology? Who is anyone to tell me what to believe and what not to believe? Who is anyone to take away the right that God, God the Omnipotent, has given me?”


Explaining the Christian responsibility to advocate for all, Archbishop Angaelos said:

“Whether the persecution is against a Coptic Christian, an Orthodox Christian of any sort, a Catholic, an Evangelical, or even a Rohingya, a Baha’i, or a Sufi, this is abhorrent in the eyes of God. God gave us all His image and His likeness equally. He calls us to be advocates for that image and that likeness and for that sanctity of life equally. We cannot stand with any kind of credibility advocating for our own if something happens to my neighbour and I question whether or not I am “my brother’s keeper?” The answer in the Scriptures is ‘of course I am.’ We are not only our brothers’ keepers; we are our brothers’ advocates, and we must never let them suffer alone.”​


Lastly he spoke a word to the perpetrators of persecution, reiterating messages of forgiveness spoken of in past addresses and statements:

“Recently some of you may have heard that I issued a statement after our own brothers and sisters in Egypt were brutally shot. It was a message to the perpetrators saying, ‘You are loved. Your actions are abhorrent and detestable, but you are loved by my God, and by me, and by millions like me, because you have the same nature, image, and likeness as me.’ We pray that God, Who speaks to their hearts, brings them to a place where their eyes are opened and they see the sanctity of life, and turn away from seeing other humans as mere commodities.” 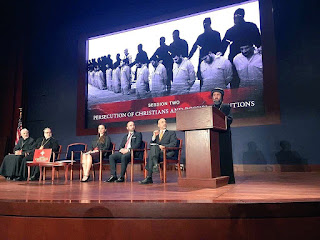 
Archbishop Angaelos presented gifts of Coptic Orthodox icons to His Eminence Archbishop Demetrios of America, and other members of the conference.

For the full address by Archbishop Angaelos visit: Youtube.com/CopticMediaUK

Key statistic: While about 30 percent of the world’s population identifies as Christian, the International Society for Human Rights notes that 80 percent of all acts of religious discrimination are directed at Christians.

Posted by The Coptic Orthodox Church Centre at 15:43