Press Release: U.S. Secretary of State, Mike Pompeo, listens to freedom of religion or belief concerns at a meeting with faith leaders in Lambeth Palace

U.S. Secretary of State, Mike Pompeo, listens to freedom of religion or belief concerns at a meeting with faith leaders in Lambeth Palace 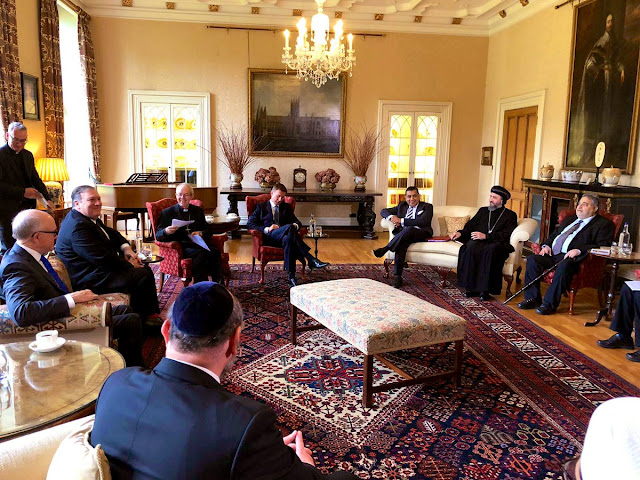 On 8 May 2019, an unprecedented meeting with the U.S. Secretary of State, Mike Pompeo, hosted by The Most Revd Justin Welby, Archbishop of Canterbury, and attended by the Foreign Secretary Jeremy Hunt, the Prime Minister’s Special Envoy on Freedom of Religion or Belief, Lord Ahmad of Wimbledon, Ambassador Johnson, US Ambassador to the UK, and UK-based faith leaders, was held at Lambeth Palace. The aim of the meeting was to allow faith leaders to present religious freedom concerns affecting communities worldwide, along with suggestions as to how such challenges can be addressed.
This meeting was a precursor to a ‘Ministerial to Advance Religious Freedom’ which will be hosted by Secretary Pompeo in the United States in July of this year.

The faith leaders participating in the conversation at Lambeth Palace were: His Eminence Archbishop Angaelos, Coptic Orthodox Archbishop of London, His Grace Archbishop Kevin McDonald representing the Catholic Bishops Conference of England and Wales, Chief Rabbi Ephraim Mirvis, 11th Chief Rabbi of the United Hebrew Congregations of the Commonwealth, Imam Qari Asim, Chair of Mosques & Imams National Advisory Board, and Yousif Al-Khoei of the Al-Khoei Foundation.

The meeting came just days after the interim report on the persecution of Christians worldwide, commissioned by Foreign Secretary Jeremy Hunt, revealed that of the faith communities persecuted in the world, 80% are Christian. This also comes after attacks in recent weeks on praying communities in Christchurch, Pittsburgh and Sri Lanka, among others, as well as many other gross religious freedom violations leading to tragedies worldwide, which often go unreported.

“This was a welcome meeting because it brought together policy makers and religious leaders to speak on a topic that affects all of our communities. It is only with this holistic approach that we can hope to move forward and truly address religious freedom violations, and promote the safeguarding of every life which is sanctified by God.

We must, as a global community, recognise that just as there are systematic and targeted attacks on Jewish and Muslim communities, there is a similar phenomenon of attacks on Christian communities worldwide.

Religious and political leaders have a shared responsibility in promoting love, respect and acceptance of all, and to stand against the rhetoric of hate and division. The only way forward is for us as humanity to work together, and consider an attack on any of us, as an attack on all of us.”

Posted by The Coptic Orthodox Church Centre at 13:10