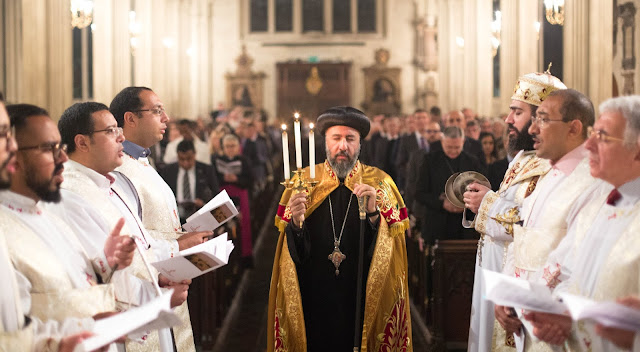 Messages from Her Majesty The Queen, His Royal Highness The Prince of Wales, The Most Reverend Archbishop Justin Welby and His Holiness Pope Francis, were read during the annual Coptic New Year Service at St Margaret’s Church, Westminster Abbey on 8 October 2019. The Very Reverend Dr John Hall, Dean of Westminster welcomed over four hundred and fifty guests from the House of Lords and House of Commons, the Diplomatic Corps, the Foreign Commonwealth Office, the Home Office, and humanitarian and advocacy organisations, various ecumenical and inter-religious guests, and members of the Coptic Orthodox community in the United Kingdom. 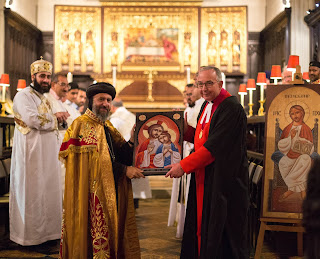 After his welcome, His Eminence Archbishop Angaelos, Coptic Orthodox Archbishop of London, thanked The Very Reverend Dr John Hall for his support during his time as Dean of Westminster, and wished him every blessing for the next stages of his ministry, presenting a Coptic icon of St John the Beloved, on behalf of the Coptic Orthodox community in Britain.
The traditional Coptic vespers service was officiated by His Eminence Archbishop Angaelos, who delivered a sermon on the theme of unity and solidarity, encouraging congregants to be light in darkness, and unified in bringing hope to all, despite challenges faced.

Towards the end of the evening, addresses were delivered by His Eminence Archbishop Nikitas, Greek Orthodox Archbishop of Thyateira and Great Britain, His Excellency Tarek Adel, Ambassador of Egypt to the United Kingdom, The Lord Ahmad of Wimbledon, Minister of State for the Commonwealth and the United Nations, and Prime Minister’s Special Representative on Preventing Sexual Violence in Conflict, and The Viscount Younger of Leckie, Parliamentary Under Secretary of State and Minister for Faith and Communities.

The message from Her Majesty The Queen, read by The Rt Revd Jonathan Goodall, Bishop of Ebbsfleet, conveyed warm wishes to the clergy and

congregation of the Coptic Orthodox Church, as well as all in attendance; also honouring those who have made the ultimate sacrifice for their Christian Faith. His Royal Highness The Prince of Wales, also extended warm wishes to the Coptic Orthodox community in his message read by The Right Reverend James Newcome DL, Bishop of Carlisle, offering heartfelt prayers for those who continue to face persecution and suffering for their Faith.

The Archbishop of Canterbury, in his message to the Coptic Orthodox community, presented by The Right Reverend Christopher Chessun, Bishop of Southwark, said: 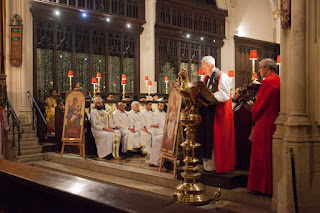 “It is my great pleasure to send you greetings as you celebrate Nayrouz once again…At new year we look back at the years past and forward to the years ahead. As we look back we remember all those who have gone before us, not least those who have shed their blood as martyrs for the faith. Those who go before make us what we are today.”

“May each one of us, united in our faith in Jesus Christ, be the one who announces peace, salvation and the Kingdom of God in his world.”

His Holiness Pope Francis, in a message presented by His Excellency Archbishop Edward Joseph Adams, Apostolic Nuncio, recalled the fraternal bond with His Holiness Pope Tawadros II, Pope of Alexandria and Patriarch of the See of St. Mark, and offered warm wishes to the Coptic Orthodox community: 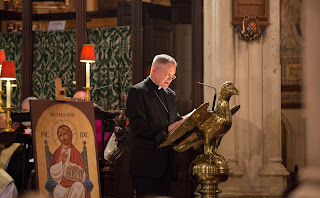 “Informed of this observance, Pope Francis, in recalling the bond that united him with his dear brother His Holiness Pope Tawadros II, addresses a special greeting to the Coptic Orthodox Church, which has been able to give a true testimony of Faith and love even in the most difficult moments.

Pope Francis takes this opportunity of the beginning of the Coptic Year to express again his best wishes for peace and health, together with gladness and appreciation of the spiritual ties that unite the See of Peter with the See of Mark.”

His Eminence Archbishop Angaelos, in his sermon, spoke of the reason for celebrating the Coptic New Year in St Margaret’s Church, saying: 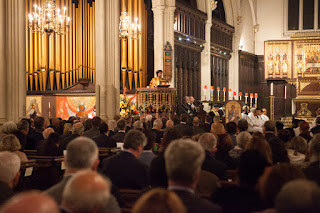 “The reason we come back to this place every year, is so that we can gather together in prayer, but also because this place, where it is situated, who it serves, and what it stands for, is light in darkness.

We have seen so much turmoil over the past few months, even years, yet it is only in places like this, places of prayer, places of grace, places of unity and solidarity, that we are able to shine light in darkness.”

Explaining the meaning behind the Feast of Nayrouz, His Eminence continued:
“The Coptic Calendar begins in 284AD, the start of the reign of Emperor Diocletian, to honour the hundreds of thousands, and some even estimate millions, of Egyptian Christians who paid the ultimate price for their Christian Faith, during his reign. Since then, Coptic Orthdox Christians have continued to witness to their Faith in Egypt and around the world, often facing challenges, with remarkable graciousness, patience, resilience, and forgiveness.”

His Eminence Archbishop Nikitas, began his address with a reminder of the significance of reflecting on the past as well as looking forward to the future: 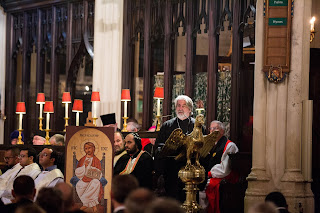 “It is important that we recall that in ancient times faithful communities celebrated this as the beginning of the New Year, to also remind ourselves to a commitment to change; perhaps it is that ideal of a New Year resolution, to change our ways and our lives and our hearts and to allow our ways of the past, our sins, to remain there.”
“May this new year be the year of grace, and joy and happiness and for the people of your communities throughout the world, may the words of the Prophet King David be fulfilled, for he said to God ‘You have changed my mourning into dancing’, and may there be no mourning for the Coptic people and the Orthodox communities, but may they be filled with righteousness, joy and even dancing, and dancing from this world to the Kingdom of God.”

His Excellency Tarek Adel, commended the Coptic Orthodox community for their courage and faith during the reign of Emperor Diocletian, saying: 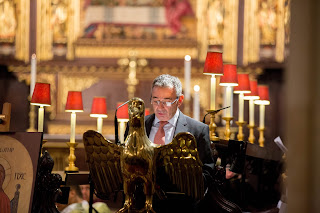 “We are indeed indebted to the martyrs of Egypt, they shone as beacons of light and gave the people strength and faith.”

His Excellency went on to say:

“From this great place of worship I want to stress that peace and harmony, and the most important thing, coexistence, should be the guiding principle of any civilised society. We are proud that Egypt has the largest Christian community in the Middle East, and we intend to keep on working to create and enhance a conducive environment for all Egyptians to prosper and reach their full potential regardless of their faith. We also hope that those who insist on building walls, or spreading fear, will come to understand that our only hope as humans is to live together in peace and harmony.”

“I also take this opportunity to convey the warm greetings of His Excellency Abdel Fattah El-Sisi, President of Egypt.”
The Lord Ahmad of Wimbledon spoke of the Coptic Orthodox Church’s official engagement in his address, the importance of people of faith advocating for one another: 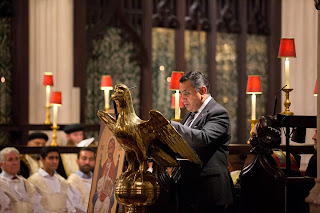 “For people of all faiths and beliefs, marking the New Year is an opportunity both to look back and reflect, but also to look forward with hope and optimism.”

“There are many people I wish to thank, but perhaps none more so than His Eminence… He is not only a wise counsel but very much in the truest sense a sincere friend.”

“I pay tribute to the many selfless individuals around the world who continue to campaign for the importance and priority of religious freedom, who inspire us with their own example and courage. And everywhere I go I live by my own belief, of my own faith, that surely the greatest test of our own faith is the conviction we show in standing up for the faith or belief of others.”

The Viscount Younger of Leckie, commended the Coptic Orthodox community in the United Kingdom and echoed His Eminence Archbishop Angaelos in speaking strongly on solidarity: 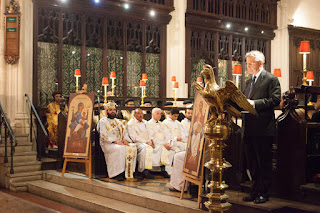 “It would be remiss of me not to commend the exceptional contributions made by members of the British Coptic Orthodox community, many of whom I know go to great lengths to support the most vulnerable people in our society, including those threatened with homelessness. Your acts speak to the incredible selflessness and ultraism of your community. Such displays of kindness and generosity show Britain at its best and set an example for us all to follow.”

“Your Eminence, you have spoken with great passion and wisdom on the significance of solidarity and friendship. The importance of renewing and strengthening those ties that bind us together. This is a vision that I wholeheartedly endorse, we remain the world’s most successful, multi-faith, multi-ethnic nation and London is the world’s greatest, most diverse city. That is only really possible when we do not take it for granted, and that is why it is important for all of us to ask ourselves what more can I do to serve my community, to whom can I extend the hand of friendship, how can I help a neighbour in need.”

The concluding words in the sermon of His Eminence Archbishop Angaelos, encapsulated the overall ethos of the evening: 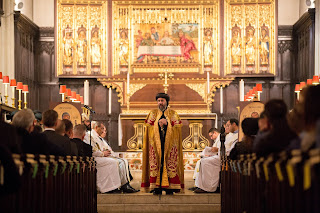 “At this time of great anxiety and uncertainty in many parts of the world, as well as our own, it is both significant and important that we gather this evening in prayer, from across the spectrum of the Church, faith, belief, and the breadth of our community and stand as one in our ongoing journey and relationship, and our commitment to one another.”

*Ends*
Posted by The Coptic Orthodox Church Centre at 13:57