The 118th Pope of Alexandria and Patriarch of All Africa on the holy Apostolic See of Saint Mark, His Holiness Pope Tawadros II was enthroned at The Grand Cathedral of St Mark in Cairo on 18 November 2012.

His Holiness Pope Tawadros II was enthroned as the 118th Pope of the Coptic Orthodox Church on 18 November 2012 in a service at The Grand Cathedral of St Mark, Cairo. HH Pope Tawadros II was chosen in an altar ballot during a Liturgical service at the Cathedral on 4 November 2012, succeeding the late Pope Shenouda III, who departed on 17 March 2012.

'It is wonderful to be part of this historic moment, seeing the jubilation on the faces of those in the Cathedral as our new father and shepherd was enthroned. Our prayers are with His Holiness Pope Tawadros II, asking for God’s guidance and grace upon him as he enters into this new stage of service, aiding the Coptic Orthodox Church in its continued mission to be light and salt in Egypt and throughout the world.'


PRESS RELEASE
For immediate use
4 November 2012

The 118th Pope of Alexandria and Patriarch of All Africa on the holy Apostolic See of Saint Mark was announced on 4 November 2012. Bishop Tawadros was chosen in an altar ballot, concluding the Papal Selection Process for the Coptic Orthodox Church.

Bishop Tawadros succeeds the late Pope Shenouda III, who departed on 17 March 2012. In a process that has taken nine months, the new Pope was selected in an altar ballot during a Liturgical service at The Grand Cathedral of St Mark in Cairo on 4 November 2012. The date of the enthronement of the new Pope will take place on Sunday 18th November 2012 at the Grand Cathedral of St Mark, Cairo.

'The atmosphere was wonderfully joyous in the Cathedral, as people not only here but all over the world raised their hearts asking God’s selection for our new Pope and Patriarch. There was such a euphoric reaction when the name of Bishop Tawadros was announced, and we now shift our prayers from God’s selection to God’s guidance and grace upon him to lead our beloved Coptic Orthodox Church as it continues its mission to be light and salt in Egypt and throughout the world.'

The new Pope of the Coptic Orthodox Church will be chosen on 4 November 2012, as announced by the Nominations Committee on 16 October 2012.

The Nominations Committee in Cairo announced the new dates for the papal selection process, with the election on 29 October 2012, and the altar ballot 6 days later on 4 November.

His Grace Bishop Angaelos, General Bishop of the Coptic Orthodox Church in the United Kingdom said,

‘Due to the early conclusion of the eliminations stage, the Nominations Committee has seen it fit to expedite the remainder of the process, so that the 118th Pope of Alexandria will be enthroned in November, earlier than expected.’

The final 5 candidates will be put forward for the papal election on 24 November, where the list will be reduced to 3 candidates. The new pope to succeed the late Pope Shenouda III will be chosen on 2 December 2012 from among those three by altar ballot, and enthroned later that month. Pope Shenouda III departed on 17 March 2012 after forty-one years of papacy.

1. The vacancy of the See of Saint Mark
2. The electoral process
3. Those eligible to vote
4. Diagrammatic timeline

1. The vacancy of the See of Saint Mark

Over the past two thousand years, the Coptic Orthodox Church has existed in Egypt, and since that time there has been an unbroken line of shepherds of the Church, commencing with the great evangelist Saint Mark, and extending to His Holiness, the late Pope Shenouda III, 117th Pope of Alexandria and Patriarch of the See of Saint Mark.

After the departure of His Holiness on 17 March 2012, we find ourselves in need of a shepherd for the Church, and are confident that God, who promises that He will never leave us orphans, will provide a shepherd according to His own heart.

Over the coming months, the Holy Synod (the council of metropolitans and bishops of the Coptic Orthodox Church), the General Lay Council (the long-existing body of laity that sees to the administrative matters of the Church) and the Coptic community in general will be called to faithfully carry out their part in placing our desires before God according to His instruction to us, while at the same time being prayerfully confident that He will be with us every step of the way. What we must also remember is that this process leads up to the Altar Ballot at the final stage, through which God will choose the right shepherd for us.

Out of respect for the memory of our departed father His Holiness Pope Shenouda III and the feelings of the Church in general, the Holy Synod unanimously decided that it would not make or receive nominations until the forty-day memorial period for His Holiness was concluded on 26 April 2012. This period has now come to an end, and nominations are being received by the Nominations Committee.

Candidates, who must be at least forty years of age and have been in monasticism for at least 15 years, can be nominated by either six members of the Holy Synod or twelve members of the General Lay Council. Nominations are accepted by the Nominations Committee for up to sixty days after the departure of the late Pope.

The Nominations Committee considers all nominations and applies the criteria previously decided by the Holy Synod to all nominees. This committee accordingly undertakes an elimination process until a final list of candidates is determined. These names are then publicly announced and posted for a fifteen-day period, during which time challenges by eligible voters may be presented to the Nominations Challenges Committee. This committee comprises three members of the Holy Synod and two members of the General Lay Council.

There is a thirty-day period for the processing of objections and appeals against those objections, after which the ruling of this committee is final and a list of five to seven candidates is announced. A date is then determined for the papal elections; this date should be no more than thirty days after the determination of the names of those candidates.

On the first Sunday after the announcement of the election results, the names of the three candidates who receive the most votes are placed on the altar at a Liturgy celebrated by all the members of the Holy Synod and thousands of Coptic faithful.  At the end of that Liturgy, one of the three names is chosen from upon the altar, known as the 'Altar Ballot'; usually by a child. This is done by the drawing of one of the three folded papers, each containing one candidate’s name; the folded paper is then opened, the name read out and held up to display before the people, announcing the next shepherd of the Coptic Orthodox Church as the 118th Pope of Alexandria and Patriarch of the See of Saint Mark. To finalise the process the other two papers are also opened.

3. Those eligible to vote

Running parallel to this process is the appointment of those who will vote in the papal election, and this is administered by an Electoral Committee that is made up of members of the Holy Synod and General Lay Council.

Each diocese is represented by twelve lay members as well as members of clergy with official roles. Once the lists of those nominated to vote are presented to the Electoral Committee, that committee ascertains their eligibility and compliance with the general criteria in accordance with the statute. Once the final list is published and posted, there is a subsequent fifteen-day period for other voters to make any challenge to the proposed voters in writing to the Electoral Committee. Again, only those eligible to vote can object.

One matter that has been considered quite closely by the Holy Synod and the Electoral Committee is that of dioceses and parishes outside Egypt. When this process was formulated in 1957, there were only a handful of these parishes, but they now number in the hundreds, serving between ten and fifteen percent of Coptic Orthodox Christians globally.

For the purposes of this election, where there are existing dioceses outside Egypt, these are treated in the same manner as those in Egypt with respect to the assignment of voters to represent that diocese; but where there are churches that do not fall within a particular diocese they are grouped within a long-term diocesan model and are treated as papal dioceses such as Cairo or Alexandria. In this case, they are also assigned twelve voters to represent them.

For the purposes of the papal elections, the United Kingdom and Republic of Ireland are divided into four dioceses, and within each diocese those eligible to vote are: the bishop, twelve lay voters representing the diocese, and priests who hold official responsibilities. According to the papal election process, there may be, if the bishop chooses, a Consultative Committee of five lay members to assist him in determining the twelve voters from the diocese. The final voter selection represents as wide a demographic distribution as possible, taking into account parishes, geography, gender and age.

The entire electoral process is estimated to take approximately six months, with the expectation that the elections will be held around September 2012, subject to any extensions or unexpected delays. All dioceses will vote on the same day, and the Holy Synod will decide the voting day pursuant to the statute.

Within these steps we find a robust process that includes: nominations from peers within the Holy Synod, nominations from laity through the General Lay Council, systematic scrutiny with a process of challenges and appeals, representative democratic election, and above all, the Altar Ballot that encompasses this whole process with a spirit of prayer and trustful submission to the will of God.

While the chronological order of stages will not change, these dates are set based on the stipulation of the electoral statute and may change as committees find the need for extensions to their allotted timescale, which will in turn have an effect upon the following stages. (Please refer to the diagram on the following page). 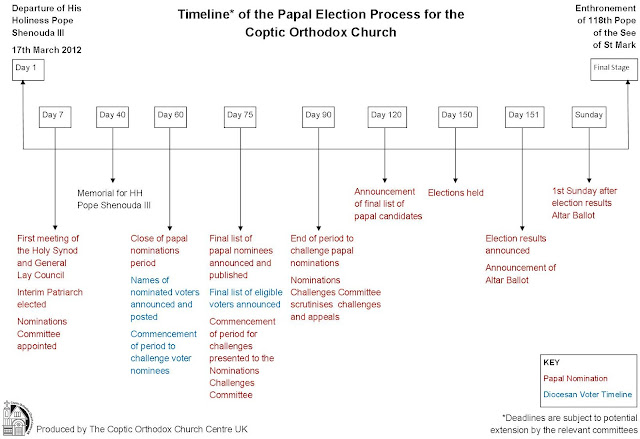